The School of Law at City University of Hong Kong (CityU) is taking the initiative to incorporate mainland placements into the credit-bearing curriculum of the Bachelor of Laws (Honours) degree programme.

CityU is the first local university to take such an action, allowing CityU law students to take advantage of the tremendous opportunities in the local legal sector resulting from the Closer Economic Partnership Arrangement (CEPA) between the mainland and Hong Kong. 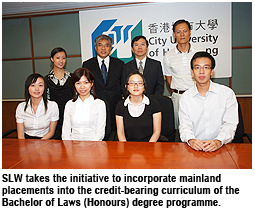 Under the arrangement, 19 students went to Renmin University this summer for six weeks to study the Chinese legal system. They visited many institutions and gained work experience at the People's Court in Xianwu and Haidian districts.

The students also visited many places not open to the public, including the Standing Committee of Beijing Municipal People's Congress, Procurator's Office, High Court, Judicial Bureau, prisons and the Olympic Traffic Control Centre in the Public Security Bureau. 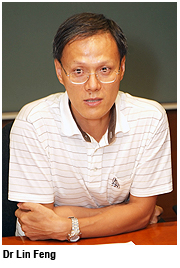 Dr Lin Feng, Associate Professor in the School of Law, is responsible for developing this placement programme. He said local enterprises venturing into the mainland would need lawyers to help them deal with legal issues as the Hong Kong and mainland economics gradually converged, therefore it would be an inevitable trend for legal firms to seek development in the mainland.

"The common law adopted by Hong Kong is very different from the continental law on the mainland," Dr Lin said. "Therefore, CityU's School of Law has incorporated courses on the Chinese legal system into the undergraduate degree programme. The mainland placement programme allows students to visit China for a better understanding of the Chinese legal system and legal proceedings."

Yao Yao and Ng Yan-kit, both Year 3 students on the Bachelor of Laws (Hons) programme, said the placement had broadened their views and enhanced their learning.

"After hearing cases in court, the judges would discuss them with us," Yao Yao said. "We learned to change our position and study cases and the legal system from various angles."

Ng Yan-kit said it was worth considering why the mainland encourages mediation rather than legal proceedings. "Judges on the mainland are more inclined to balance laws, reason and human factors, reflecting the harmonious society advocated in Chinese culture."

In addition to mainland placement opportunities, CityU students can get placements in major local law firms for up to four weeks.

Joyce Leung So-wa and Angela Woo Shun-yan, both Year 4 students on the Bachelor of Laws (Hons) programme, chose to have their internship in Hong Kong and felt that real-life cases allowed them to apply their knowledge and helped them identify their strengths and weaknesses.

After the placements, work supervisors assessed the students' performance, which would be of great help to their future development.