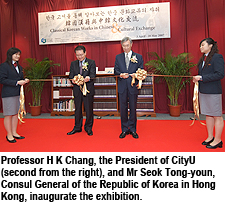 The Run Run Shaw Library of City University of Hong Kong (CityU) has recently acquired two collections with over 3,000 volumes of significant Korean works written in Chinese. Written by ancient and contemporary prominent Korean authors, the collections provide an important source of materials for studies on the history and culture of Korea and China. They will also be useful in the development of the new general education curriculum of the University.

The two collections are Han’guk yŏktae munjip ch‘ongsŏ (Anthology of Korean works through the ages), published by Kyung-In Publishing Company; and Yŏnhaengnok chŏnjip (A complete record of journeys to Beijing), published by Dongguk University.

The first collection comprises 3,000 volumes of works by over 1,000 Korean authors covering a wide range of topics—philosophy, history, literature, politics, society, economics, military, geography and astronomy. The comprehensive collection traces a long history of interaction between Korea and China.

The second collection, edited by Mr Im Kijung, contains 100 volumes that vividly record scenes of Chinese society during the Ming and Qing dynasties as seen and heard by Korean diplomatic agents during their journeys to Beijing. 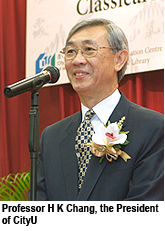 An exhibition titled “Classical Korean Works in Chinese and Cultural Exchange” is being held in the Library from 3 April to 20 May to help readers better understand the writing background of the two collections. Professor H K Chang, President of CityU, and Mr Seok Tong-youn, Consul General of the Republic of Korea in Hong Kong, officiated at the opening ceremony on 3 April.

Professor Chang expressed his gratitude to the Korean community in Hong Kong for its longtime support to the University. He said he had visited several universities in Korea on behalf of CityU and was impressed by the close historical and cultural links between China and Korea. 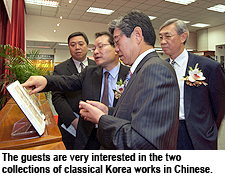 A seminar titled “Rapport between China and Korea in History” was held in the afternoon of 3 April to help readers understand the internal and external structures, as well as the writing styles of the Korean works. There is no punctuation in classical Korean works written in Chinese and, compared with Chinese works, there are major differences in the use of vocabulary and writing styles. Scholars from the Mainland and Korea analyzed the collections at the seminar.

The acquisition of these two valuable collections was recommended by Professor Cheng Pei-kai, Director of the Chinese Civilisation Centre. “The works are of significant reference value for studies of history, literature and the relationship between Korea and China. They are also important works for studies on the culture of East Asia and the world,” he said.

“Due to its proximity to China, Korea has many distinguished writers and literary works, with most of them written in the past in classical Chinese. As they present no language barriers to us, the works can serve as a good base for studies on cultural exchanges in East Asia,” Professor Cheng said.

Professor Steve Ching Hsianghoo, University Librarian of CityU, said: “We are the only library in Hong Kong that owns complete collections of the two classics. It is not common even in a global scenario. China and the Korean peninsula are geographically linked to each other, and so there have been frequent cultural exchanges between the two countries for thousands of years.”

Professor Ching said the collections could complement studies of Chinese history and culture and help with verifications and identifications. For example, comparing world maps drawn by ancient Korean and Chinese scholars could provide insights about differences in their views of the world.

The exhibition and seminar were organized by CityU’s Chinese Civilisation Centre and Run Run Shaw Library and co-sponsored by the Department of Chinese, Translation and Linguistics and Division of Language Studies.