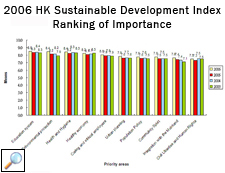 Education took the top position for the fourth year in a row as the most important factor for improving the quality of life in Hong Kong, according to a survey carried out by City University of Hong Kong (CityU) in partnership with the Canadian Chamber of Commerce in Hong Kong.

Results in the 2006 Sustainable Development Index, an index developed to track community perceptions on the importance and progress of priority areas for sustainable development in Hong Kong, show that the overall score for Hong Kong was 102.2, compared with a baseline of 100 in 2003. The small change indicates people in Hong Kong believe only minimal progress has been made in addressing the priority areas. (The score was 102.5 in 2005 and 102.8 in 2004.)

Of the 10 priority areas for sustainable development, education remains the highest concern particularly in the areas of restructuring of the education system, affordability and quality of teaching. The level of satisfaction remained moderately low at 5.6, although respondents’ satisfaction with education improved from 8th to 6th place. 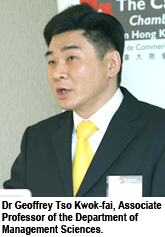 The Department of Management Sciences at CityU, which has been compiling the Index since 2003, interviewed 2,054 people aged 18 or above in August 2006. They were asked to rate the level of importance to sustainable development of 10 priority areas, and their level of satisfaction with performance in these areas, on an ascending scale from 1 to 10.

In descending order of importance, the 10 priority areas were the education system; environmental protection; health and hygiene; a healthy economy; caring and ethical employers; urban planning; population policy; community spirit and well-being; integration with the mainland; and civil liberties and human rights.

“The results reflect Hong Kong people’s concern for the education of the next generation,” Dr Geoffrey Tso Kwok-fai, an associate professor in the Department, said.

Respondents were most satisfied with Hong Kong’s performance in health and hygiene (score = 6.3 in 2006). This area has ranked 1st in satisfaction since 2003. Respondents said the major areas contributing to this were the cleanliness of public spaces (38%) and a clean and healthy environment (29%).

Environmental protection has been ranked as one of the top three areas in importance for the past three years. However, respondents’ satisfaction with efforts to protect the environment has remained in 9th place since 2005. The percentage of respondents who said that clean air could help improve Hong Kong’s environment rose to 65% in 2006, up from 51% in 2005 and 33% in 2003.

“The deteriorating air quality has become more obvious as Hong Kong is usually misty recently,” Dr Tso said. “The environmental protection campaigns advocated by the Government and other parties also increased the public awareness on this issue. These factors may partly explain why respondents regarded clean air as an important factor for improving Hong Kong’s environment.”

Speaking at a seminar to announce the results on 2 April, Mrs Anson Chan, the Index Ambassador, said the survey results continue to show that improving the sustainability of Hong Kong involves a balancing of diverse yet interconnected economic, environmental and social issues. “We need to focus our attention on improving our performance in all of these areas to achieve a sustainable and balanced quality of life,” she said. 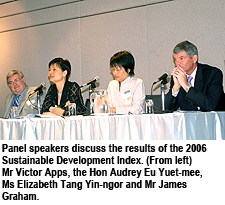 The announcement of the results was followed by a panel discussion on what needs to be done to further the sustainable development of Hong Kong. Speakers included the Hon Audrey Eu Yuet-mee, Leader of the Civic Party; Mr Victor Apps, Vice-Chair of the Hong Kong Employers Federation; Mr James Graham, Chair of Business Coalition on the Environment; and Ms Elizabeth Tang Yin-ngor, Chief Executive of Hong Kong Confederation of Trade Unions. Ms Christine Loh Kung-wai, CEO of Civic Exchange, gave the closing remarks.