Two young scholars from the Faculty of Science and Engineering at City University of Hong Kong (CityU) have recently earned international awards in their respective fields, showcasing once again the University’s applied research strength. 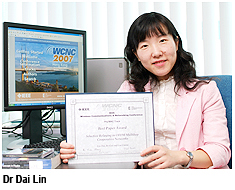 at the 2007 IEEE Wireless Communications and Networking Conference (WCNC), and Dr Michael Chan Chi-wang, Assistant Professor of the Department of Biology and Chemistry, who won the 2007 Mitsui Chemicals Catalysis Science Award of Encouragement.

“These achievements confirm once again that our colleagues ’ research work is being recognized internationally,” said Professor (Chair) Chan Chi-hou, Dean of the Faculty of Science and Engineering. “The hard work of our colleagues is reflected in our success rising five places to 85th in the world’s top institutions in the technology field in last year’s world university rankings conducted by Times Higher Education Supplement.”

The WCNC, held from 11 to 15 March in Hong Kong, is one of the world’s foremost annual international technical conferences for engineers and researchers working at the forefront of the development and deployment of wireless technologies. This year was the first time the WCNC was held in Hong Kong, and the first time outside North America.

The WCNC Best Paper Awards feature competitions in three tracks of the wireless communications and networking field: Phy/MAC; Network; Services and Applications, respectively, only the best paper of each track will be honoured with the Award. This year, some 700 papers were chosen from 2,000 submissions to compete for the Awards. 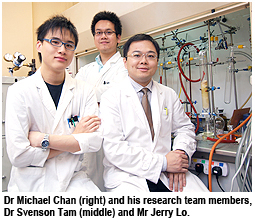 Dr Michael Chan Chi-wang is one of two awardees to receive the Mitsui Chemicals Catalysis Science Award of Encouragement. This award is given every other year to up to two researchers aged 35 or below with the most original achievements.

Dr Chan, working with his research team, has highlighted the importance of weak attractive polymer-ligand interactions in the production of polyolefin materials, an achievement that develops new guidelines for the design of catalysts for more efficient polymerization processes and preparation of new materials.

He was invited to deliver his award lecture in Tokyo at the Third Mitsui Chemicals International Symposium on Catalysis Science in March, which featured lectures by three Nobel Laureates in Chemistry. “It is a great honour and privilege to win this award, and it was particularly rewarding to receive recognition for research that is both basic and applied in nature,” Dr Chan said.