Nobel Laureate in Physics lectures on atomic clocks at CityU 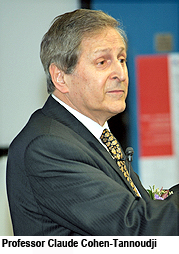 World-renowned physicist and Nobel Laureate Professor Claude Cohen-Tannoudji gave an inspiring lecture on applied physics to a full house of staff and students at City University of Hong Kong (CityU) on 27 February.

The public lecture on “Measuring time: atomic clocks and ultracold atoms” is part of the France-Hong Kong Distinguished Lecture Series co-organized by the French Academy of Sciences, Consulate General of France in Hong Kong, and CityU.

The lecture given by Professor Cohen-Tannoudji, who also came in his capacity as Chair Professor-at-Large at CityU, was extremely well received by CityU staff and students, as well as secondary school students and teachers. 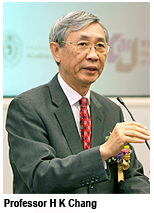 Professor H K Chang, President of CityU, said in the opening speech: “It is the honour and indeed good fortune for CityU to have such a connection with the science community in France.” He called on the French Consulate General to continue to help enlighten Hong Kong society with similarly inspiring lectures in the future. “Intellectual life in Hong Kong is already good but would improve with closer connections to world-famous historical institutions such as the French Academy of Sciences and Collège de France,” he said. 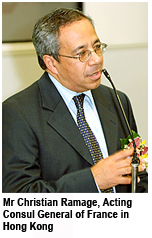 The atomic clocks, explained Professor Cohen-Tannoudji, are extremely precise, with an error of less than one second in 3 x 108 years. During the hour-long lecture, he reviewed ideas for the applications of these ultra-precise atomic clocks, such as putting them in a microgravity environment. The talk was followed by a very lively Q&A session. 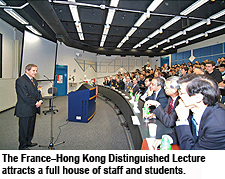 Professor Cohen-Tannoudji has been Professor of Atomic and Molecular Physics at the Collège of France in Paris since 1973. His research into radiative forces on atoms in laser light fields, laser cooling and trapping has had a deep impact on many aspects of physics. He was awarded the Nobel Prize in Physics in 1997 for the development of methods to cool and trap atoms using laser light.

In addition to the public lecture, Professor Cohen-Tannoudji will present a series of lectures at CityU on “Selected Topics in Atomic, Molecular and Optical Physics”, from 28 February to 6 March. These lectures will cover new perspectives in the development of the manipulation of atoms with lasers, atomic physics and quantum optics.