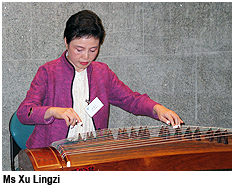 About 40 friends, colleagues and students from City University of Hong Kong (CityU) were treated to a special performance of guzhen music by Ms Xu Lingzi, one of the instrument’s leading exponents.

Ms Xu, a lecturer in the School of Music at the Hong Kong Academy for Performing Arts, lit up the foyer of the Multi-media Conference Room, usually reserved for more sober meetings and academic conferences, with an elegant recital at the latest gathering of the City Cultural Salon.

Since October 1998, Professor H K Chang, University President, has invited renowned scholars and artists to the City Cultural Salon, held each month at City Lodge, the President’s residence on Kadoorie Road. During the Salons, the latest of which took place on 14 December on campus, guests and participants exchange views on the arts, history, literature and philosophy in an informal setting. To date, over 80 gatherings have been organized. 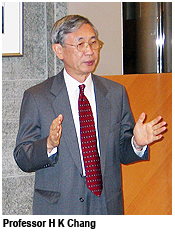 In September 2005, Professor Chang published a commemorative collection of the first 70 gatherings, entitled A Feast of Culture and Arts for 70 Meetings, and took the chance to raise money for a CityU Cultural Activity Fund. Thanks to generous donations from Salon attendees and the Government’s matching grant, the fund has reached over $1.7m. The pot remains intact and will be passed on to the CityU Cultural and Sports Committee.

Professor (Chair) Benjamin T'sou Ka-yin of Language Information Sciences Research Centre, one of the participants at the latest Salon, and a frequent guest at the City Cultural Salon, said the Salon bridges the University and the community, pointing out that it is a vivid example of “from gown to town”. 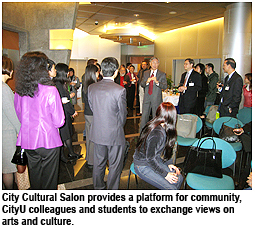 Zhang Jing, a PhD student in the School of Creative Media, said holding the City Cultural Salon on campus would have an impact on CityU’s cultural atmosphere, adding that students would learn a lot by attending the Salons once or twice during their studies. Although Professor Chang is going to retire, she added that he could still take part in the Salons.

Mr Nelson Ng, the conductor of the CityU Chinese Orchestra, said he gave his full support to the Salons. “One of the missions of a university is to promote cultural awareness,” Mr Ng said. “These gatherings offer a precious opportunity to cultivate interests in the arts in a relaxing atmosphere. Such an experience benefits students and is an eye opening experience for everyone involved.”

Although Professor (Chair) Horace Ip Ho-shing of the Department of Computer Science admitted he was no music aficionado, he liked the idea of the Salon because it offers a chance for people with different backgrounds and interests to learn from each another. “I’m glad to have the chance to bring my students to the Salon. It is another excellent learning opportunity,” Professor Ip said.

A research degree student in the Department of Computer Science who joined Professor Ip at the Salon, Belton Kwong said the Salon was very inspiring. Belton studied digital music and likes listening to western music, so the Salon gave him the chance to get acquainted with another type of instrument.

Both Belton and Mr Tom Cheung Tin-yau, a CityU alumni and an assistant conductor with the CityU Chinese Orchestra, agreed that the City Cultural Salon is a great introduction to prominent scholars and artists. He said the Salon was more friendly than a lecture because people could chat more informally.

“There’s a very homely feeling at the Salons,” said Professor Cheng Pei-kai, Director of Chinese Civilization Centre and Chairman of the Cultural and Sports Committee. “And it will be even more meaningful when the Salon takes place on campus. We’ll be able to feel the impact.”

Professor Cheng said the current format would continue. In addition to outstanding local artists, CityU would invite prominent scholars and artists who stop by Hong Kong. “Hong Kong is a dynamic city with a highly mobile population,” Professor Cheng said. “There are many people going to other places via Hong Kong and they provide a rich resource.” 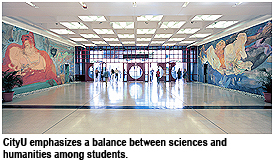 The University already has a strong artistic culture, as evidenced by the two murals, “Scholar in Contemplation with Guqin” and “Wanhu Propelled to Heaven”, which hang at the main entrance to the Academic Building, welcoming visitors to campus. The murals reflect CityU’s emphasis on striving for a balance between the humanities and sciences.

Professor Cheng hopes that holding the City Cultural Salon on campus will further add to this balance and help to reinforce the University’s focus on professional education and applied research.