My experience as a student ambassador 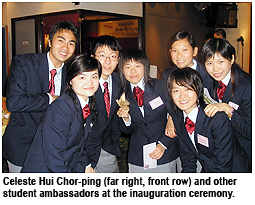 Two events in 2005 stand out for me. I became a university freshman on a degree programme that I really wanted to take, the Bachelor of Arts (Hons) in Translation and Interpretation; and I became a student ambassador on the “A” Project, one of the most exciting student development programmes at CityU.

While both events were memorable, being a student ambassador really changed my life. The emphasis put on whole-person development in “A Project” helped me to mature as a person, the experience broadened my view of the world, and my overall quality as a student improved.

The reason behind this success lies with the workshops and seminars that we joined and the responsibility that we shouldered. As student ambassadors, we attended numerous training sessions on topics such as critical thinking, dining etiquette, business attire, current affairs and issues concerning CityU. Plus we had the chance to participate on international study tours. 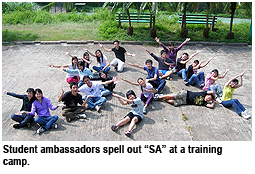 During this period, I began to fulfill my potential as a leader, helping to host events such as the “Thanksgiving Week in CityU”. Acting as a key decision maker as opposed to playing the role of a follower, as in secondary school, was a really enjoyable change.

After receiving this level of professional training, “A” Project students are well prepared to help promote the University. We are, literally, ambassadors for CityU! Our duties include attending important events on campus and welcoming guests from local and overseas organizations.

One of the most gratifying aspects of this project was the chance to make friends from around the world, especially meeting non-local exchange students. Although many of my new-found friends have returned home, we stay in touch through the Internet. Through such interactions, I learned a great deal, noted my strengths and weaknesses, and identified ways to enhance and add value to myself. 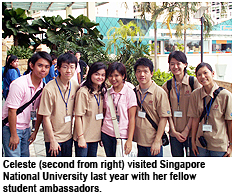 I applied to be a student ambassador because I am the kind of person who wants to try everything, and the programme looked like the kind of challenge I would enjoy. But also I liked the title—“A” Project— because it suggests that the selected students are A-grade quality!

I sent in my application right away, and went through two rounds of interviews. But, to be honest, I felt that I performed poorly in the interviews, and I became rather apprehensive. Would I make it? I wondered to myself. So I was overjoyed when I was told I had been successful. I was also quite surprised because I was fully aware that there had been many outstanding applicants.

Later, I met one of the interviewers and asked why I had been chosen. She told me that while academic performance was certainly a major consideration, other personal attributes were also counted. After all, I was told, CityU strongly promotes whole-person development. I felt much better after her explanation and I felt vindicated that I had made the right decision to study at CityU.

Thus my experience as a student ambassador has taught me a great deal about the world around me and about myself. I have been able to channel my natural curiosity into a very positive project and I have fulfilled my potential. I would not hesitate to encourage other students to become CityU student ambassadors!