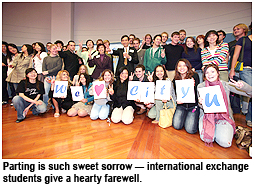 games and even a mass belly dance were the highlights at a farewell party as more than 120 exchange students bid goodbye to their new friends at City University of Hong Kong (CityU).

After their semester-length stay, the students, who came from universities across Europe, Asia, Australia and North America, shared with each other their thoughts and feelings at the party organized by the tireless team behind the CityU Buddy Scheme and the International and Non-local Students Office on 1 December.

Professor Richard Ho Yan-ki, Vice-President (Undergraduate Education), who attended the party with Professor Lilian Vrijmoed Lee-ping, Dean of Student Learning, told the party participants that he was sad to see them leaving.

“I hate to say goodbye. I much prefer to say hello!” But he encouraged them to tell their friends and family back in their home countries about CityU and to return in the future.

“CityU is going to increase its intake of non-local and international students over the next few years as we internationalize our campus,” Professor Ho said in his address.

For one of the non-local students the farewell party was not a farewell at all. Gamze Erbora, studying applied biology in the Department of Biology and Chemistry, has enjoyed her time at CityU so much that she has requested, and been granted, another semester.

Gamze said CityU’s state-of-the-art facilities had impressed her the most. “The technology is very good. You can access PCs everywhere on campus and borrow laptops for a whole day. CityU is a very developed university,” she said. One semester was also not enough to learn about Chinese people and their culture, she added.

Gamze led a demonstration of a traditional Turkish belly dance at the farewell party to great applause. “I’m glad to teach people a little bit about my own culture,” she said.

Speaking on behalf of the non-local students, Samuel St-Pierre, a 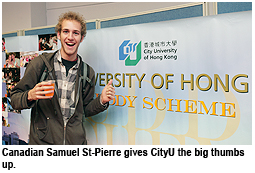 Canadian studying in the Department of English and Communication, said he would miss the friends he had made at CityU.

“The staff here is very professional, hard working and they are all very helpful. The academic system is a bit different to the one I am used to in my home country but once you get adjusted there is no problem,” he said.

Samuel ended his short talk with some reflection on what his experience as an international exchange student at CityU had taught him.

“We should always judge people for who they are, not by where they come from,” he said.