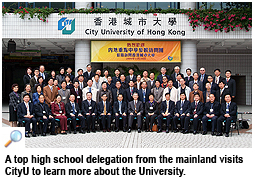 A delegation made up of personnel from mainland secondary schools paid a visit to City University of Hong Kong (CityU) on 30 November to find out more about next year’s admission exercise.

While exchange visits from mainland educational institutions are frequent, this is the first time a delegation of this size has visited CityU, according to Professor H K Chang, University President. Altogether, 38 top mainland high school principals, administrators and teachers were welcomed onto campus.

At the meeting, Mr Mo Jingjiang, Deputy Director of the Education and Science and Technology Department of the Liaison Office of the Central People’s Government in Hong Kong, said more and more mainland students were opting to study in Hong Kong, and many Hong Kong students were heading to mainland universities. 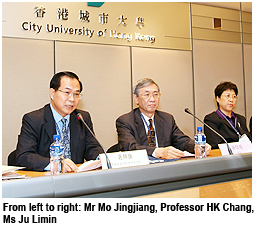 Mr Mo hoped to promote academic exchanges between the mainland and Hong Kong by intensifying the two-way traffic of delegations.

Ms Ju Limin, Principal at the Yaohua High School in Tianjin, said the trip to CityU had convinced her that mainland students who had chosen to study in Hong Kong had made good choices. She would recommend Hong Kong universities as an alternative choice for mainland high school graduates, she said.

CityU has been enrolling high-performing mainland high school graduates by means of the National College Joint Entrance Examination Scheme since 2005.

Professor Richard Ho Yan-ki, Vice-President (Undergraduate Education), pointed out that CityU recruited 193 mainland students in 2005. In 2006, the plan was to recruit 170 new mainland students, but in the end selected 207 because of the excellent exam results.

“CityU’s strategy is to maintain stable growth in the mainland student intake, and at the same time increase the quality of the students,” said Dr Zhu Guobin, Director of the External Liaison and Cooperation Office. He said CityU would use the National College Joint Entrance Examination Scheme to enroll new mainland students next year.

In addition, the student enrollment number allocated to various provinces and cities would be announced in March, by which time CityU would have taken into account local conditions and would be flexible when deciding intake numbers, he continued.

During the meeting with the visiting delegation, mainland graduate and undergraduate students shared their experiences of studying at CityU. Chen Jiashu is a Year 3 student of electronic engineering from Zhejiang province who spent a year at Fudan University before coming to CityU. 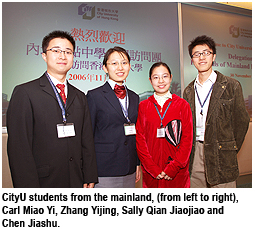 He recently won an International Fulbright Science and Technology Scholarship from the US State Department and will be going to the US for further studies.

Three factors drew him to CityU. First, he wants to improve his English so he can communicate better within a globalized world; second, he believes the Department of Electronic Engineering at CityU is one of the best in the Asia-Pacific region; third, CityU is an internationalized university and its education runs parallel with the rest of the world.

Mr Carl Miao Yi, who was enrolled in the Department of Public and Social Administration seven years ago, also returned to share his experience. Eight years ago, Mr Miao, who comes from Jiangsu province, faced a tough decision when choosing which university to attend.

“Choosing the right place to study has a big impact on your future career,” he said. Shy by nature, Mr Miao is now a confident sales representative for a French multinational thanks to an education at CityU in which he could exchange opinions with classmates from all over the world and where he grew in self-confidence, especially after joining the University’s Putonghua debating team, he said.

“Hong Kong’s employers are thirsting for talent so mainland students don’t have to worry about finding profitable employment here,” said Mr Miao, who is Vice-President of the Hong Kong Association of Mainland Graduates. The Association maintains links with more than 10,000 students.

Zhang Yijing, a student in the Department of Manufacturing Engineering and Engineering Management, said CityU made her feel welcome and she appreciated CityU’s philosophy of putting students first.

Sally Qian Jiaojiao, who came to CityU three months ago, has just started her foundation year. She said fate had led her to study at CityU, and if she had to choose again, she would still choose CityU.