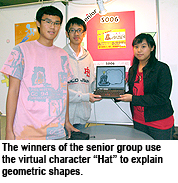 The competition provided a great opportunity for secondary school students to enhance their computer design skills, exchange ideas on media design. CityU students could also apply what they have learned in class and help promote computer design and media creativity through organizing the competition.

The task was to design an interactive interface for teaching primary school mathematics using “My Computer Assistant”, an animated virtual character. 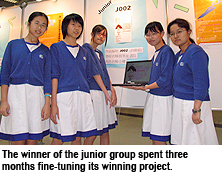 The chairman of the adjudicating panel Dr Raymond Wong Hau-san, an assistant professor in the Department of Computer Science, said the standard of the entries had improved, especially in the design of the interactive interface and virtual characters. He made special mention of the excellent designs produced by the two winning teams and the content that caters to the learning needs of primary school students. 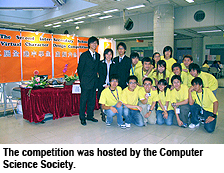 In preparation, the organizing committee hosted workshops on media production and computer design during summer vacation. Both the winning teams said they would recommend next year’s competition to their friends and make use of the workshops to sharpen their computer skills.

The adjudicating panel for the competition consisted of four assistant professors and two instructors from CityU plus two members of the Hong Kong Association for Science and Mathematics Education.