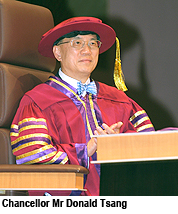 City University of Hong Kong (CityU) is holding its 2006 Congregation from 9 to 17 November. Chancellor of CityU and Chief Executive Donald Tsang Yam-kuen was the presiding officer at today's (15 November) Congregation. This year, CityU has produced 9,178 graduates through its provision of quality professional education. 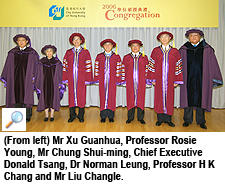 In his address, Professor H K Chang, University President, recalled his first Congregation speech at CityU ten years ago. He talked about what CityU and Hong Kong had become and what challenges our new graduates would face in the future. (Full-text of President's address) 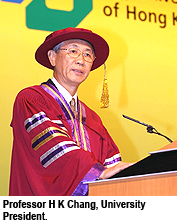 Hong Kong was still a colony 10 years ago, but now it is a special administrative region. According to Professor Chang, 10 years ago most people in Hong Kong still called CityU by its previous name, City Polytechnic, but now CityU is recognized and respected internationally, having nurtured more than 65,000 professionals in total. The ever-changing world has become so “flattened” in the new age of globalization, however, that each professional worker is potentially an equal competitor.

In order to cope with the future challenges, Professor Chang told the graduates “never cease to strengthen yourself” and reminded them that “only after you learn will you realize there is much more to learn”. 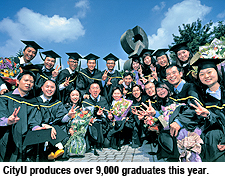 “Dear graduates, this is the field of competition you are entering. It is as if you have been selected to compete in the 2028 Olympic Games, but you do not know in what event you will be asked to compete, nor will you know the rules of the event until 2027,” he said. “But do not let that prospect scare you. You have been given the necessary preparation at CityU for this type of competition.”

In his note of thanks, Mr Xu said that it was an immense honour to be conferred an honorary degree by CityU. “Today is such a day, a day that Mr Liu Changle, Professor Rosie Young and I will never forget. We will adhere to CityU’s motto Officium et Civitas and let it be our common inspiration,” he said. 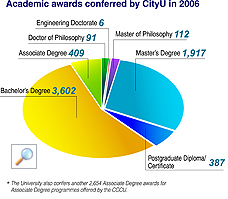 Graduate representative Ng Lok-hang of the School of Law said in his speech that the Class of 2006 at CityU received legal education at a time when the rule of law was most needed. “Our society calls for the rule of law to ground the principle of ‘one country-two systems’. In this respect, the School of Law has provided its students with a first-class education and so we are prepared to face whatever challenges that the world has to offer,” he said.