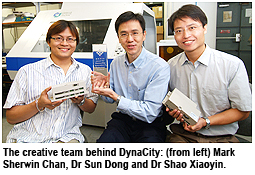 These achievements once again illustrate CityU’s excellence in applied research and the University’s commitment to adopting innovative technology for the benefit of Hong Kong through CityU Enterprises, the extension arm of the University that helps to commercialize research outcomes and turns innovative research projects into viable companies.

The TeleEye Group and DynaCity Technology won Gold Awards in the HKIEA awards for Outstanding Innovation and Technology Products 2006 in the categories of “Security Products” and “Parts/Components”, respectively.

The TeleEye Group, which has been listed on the Growth Enterprise Market in the Stock Exchange of Hong Kong Limited since May 2001, was also awarded the overall Grand Prize, selected from 22 finalists in the four categories, the other two being “Consumer Electronics” and “Personal; Electronics”. 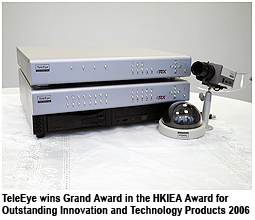 “I am delighted that we have won the overall Grand Award,” said Dr Cliff Chan Chok-ki, CEO of the TeleEye Group and Adjunct Professor in the Department of Electronic Engineering. “In the past, we have won Gold Awards in the “Security Products” category. This time we won both.”

Dr Chan, a former academic in the Department of Electronic Engineering at CityU before he joined the management of the Group on a full-time basis in December 2000, is one of the founders of TeleEye.

Meanwhile, DynaCity Technology won its award for its second generation 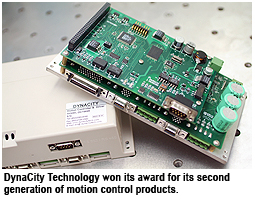 “Getting the Gold Award this year means that our work over the past three years has been well recognized by industry,” said Dr Sun Dong, DynaCity chairman and an associate professor in the Department of Manufacturing Engineering and Engineering Management.

“Our technology is very accurate and very fast and can be used in machines that build many other different kinds of application,” said Dr Sun, who set up DynaCity three years ago.

In addition, DynaCity is the sub-contractor for the provision of motion controller/drivers for the installation of e-channel gate controllers at some checkpoints in mainland China.

“CityU's mission is to anticipate and respond to the needs of industry, commerce and the community by engaging in applied research and using the results of such work to directly benefit Hong Kong and beyond,” Mr Ng said.

The Hong Kong Electronics Fair 2006, which was held at the Hong Kong Exhibition and Convention Centre from 13 to 16 October, is the biggest electronics show in Asia and second only to the Consumer Electronics Show in the US. More than 3,400 booths operated at this year’s show.