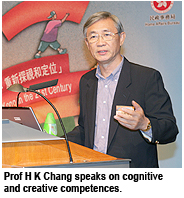 Many people think creativity is so elusive and intangible that it cannot be pursued by any set rules or patterns. One can only wait, passively, for an idea to pop up into mind. But is this really the case?

Professor H K Chang, President of City University of Hong Kong, discussed cognition and creativity at a conference on "Redefining Youth Development Work in Hong Kong in the 21st Century" at Wei Hing Theatre on 6 May.

Professor Chang said that cognition is a mental process of knowing things, whereas acquisition of knowledge means taking the initiative to understand something thoroughly. In today's information age, young people have lots of opportunities to acquire knowledge. However, he said that it is vital to differentiate knowledge from mere data. These days we are overwhelmed with huge amounts of data, so we should learn how to transform data into our own knowledge, according to Professor Chang.

Professor Chang added that if we examine cognition and creativity from the perspective of religion, then God is the only creator in the world. In such a case, strictly speaking, human beings are just rearranging things which already exist. In the process of rearranging things, human beings must apply what they know about this world and express their thoughts in different ways. He maintained that it was therefore impractical for young people to talk about creativity if they had not broadened their knowledge base.

The prerequisite for creativity was a comprehensive understanding of the world, Professor Chang said, adding that it was natural that human beings had a strong desire to express their creativity at certain points in their lives.

“Some people believe that creativity can be taught,”Professor Chang said, “but I think creativity is the expression of one's feeling and understanding about the world, based on deep reflection and experience.”

Professor Chang cited an interesting example. An artist put his secretion into 68 small bottles and put them together as a piece of installation work. This appears to be a relatively outlandish concept, but the idea of designing that installation reflects the artist's interpretation of life. However, Professor Chang said that how we express ourselves and what messages we deliver were closely related to our knowledge and understanding about the world. In light of this, Professor Chang said he would like to encourage young people to have more exposure to the world in order to gain more experience.

At the same conference, Professor Lo Tit-wing from the Department of Applied Social Studies discussed the importance of understanding the cultural role played by the young people of today and the problems faced when discussing the future direction of youth development work.

Professor Lo said most teenagers today did not have any cultural roots and many were raised by domestic helpers. Once in the workplace, fame and fortune become life goals.

He also said the culture of hard work commonly found in Hong Kong had a positive effect on the younger generation, but that the local political culture, an emphasis on materialism and the reporting style of the mass media had a negative impact.

Professor Lo said he hoped youth development work will be a process of self- understanding and empowerment through which young people can strengthen personal growth, family relation, career development, and their contribution to society, China and the world.