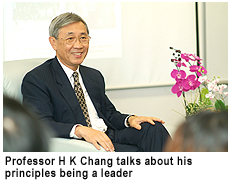 Professor H K Chang, CityU President, shared his thoughts on the art of leadership at a meeting arranged by Student Development Services on 27 March. Such was the level of interest among the audience of 50 student leaders that it was suggested Professor Chang continue to hold similar workshops after his retirement next year.

Drawing on 40 years of professional life, Professor Chang said the art of leadership was essentially the art of getting along with people. “The bottom line is making sure you are tuned in and achieve balance. You should not press ahead too fast, or you will isolate yourself. At the same time, you should not move too slowly, or you will lag behind,” he said.

Professor Chang pointed out that a good leader must understand how far his or her team can go, and be able to lead a team to achieve a common goal. Whether a student or a community leader, you should be able to adapt to circumstances, accommodate others, work hard, accept criticism and stick to your principles.

Recalling his days as an undergraduate in Taiwan, Professor Chang said he was an active student leader, and the friendships and interpersonal networks that he built during that time have lasted until today.

In addition, Professor Chang recalled the interview he attended eleven years ago when he was a candidate for his current job. The selection panel asked: “What is your guiding principle at work and as a person?” Professor Chang answered: “To be as accommodating as the ocean and resolute as a mountain.”

From his own experience, Professor Chang said it was easier for a leader to work hard than receive criticism. He quoted Chinese proverbs and stories from the Bible to illustrate the importance of understanding. A good leader should listen not only to praise and flattery, but should be open to criticism. 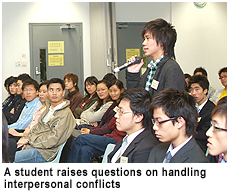 In conclusion, Professor Chang said he was very proud of CityU students’ accomplishments and he was genuinely concerned for their well being. He said if he were to serve as CityU President again, he would like to spend more time with students and encourage them to be more diligent. He made special mention that student leaders should fulfill their study requirements before participating in student activities.

At the end of the meeting, Professor Vrijmoed raised the issue of developing students’ international vision. Professor Chang said young people living in Hong Kong were lucky to reside in an internationalized city. He said he planned to live in Hong Kong after her retires, and he encouraged students to maintain a perspective on international issues, without which the future of Hong Kong will be at stake.