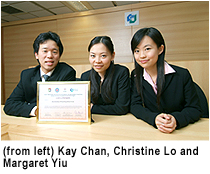 CityU is dedicated to providing students with a first-rate legal education in order to better serve the community and the region and to expose students to global issues concerning human rights.

The CityU team made the top five in the 4th Red Cross International Humanitarian Law (IHL) Moot after two days of intense debating. 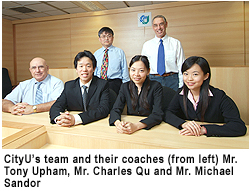 “To be ranked in the top five is a well deserved achievement and reflects the hard work and effort put in by all three of our team,” said the team’s coach, Mr Tony Upham, an associate professor in the School of Law (SLW). “They can, justifiably, take pride in what they have achieved.”

This year 14 universities, including CityU, the University of Hong Kong (HKU) and universities from mainland China, the Philippines, South Korea, Singapore, Malaysia, Indonesia, Japan and Australia, participated in the competition.

The IHL Moot, which was held between 17 and 18 March at the High Court in Hong Kong, raises awareness of international humanitarian issues among law students through the examination and debate of wider social issues rather than by focusing merely on black letter law.

In the competition, each participating university was assigned the role of the applicant or the respondent in a fictitious court case, and participants debated whether certain acts violated the Geneva Convention.

The Moot was timely, given the recent crises that have heightened the public's awareness of the scale of human suffering in conflicts around the world, according to organizers.

Kay said being selected as a mooter by SLW to take part in the Moot was an eye-opening experience. He said it made him appreciate the need to see competition from a regional and global perspective.

“We are not just competing among ourselves in Hong Kong but with our counterparts beyond Hong Kong. The fact that both CityU and HKU teams beat other teams from the region to make the top five demonstrates the quality of Hong Kong law students,” he said.

Christine, a fellow mooter, said her interest in international public law motivated her to take up this challenge. “It was a tough experience because we were given only a few months to familiarize ourselves with the subject matter, which is not covered in our courses. But all the hard work paid off because I can now see my potential as a barrister. This is really important for helping me to chart my future career,” she said.

Margaret, who did the research for the team, said the Moot gave her valuable real-life experience working as a solicitor for a team of barristers.

Seven other SLW students were involved in the competition, acting as court clerks and bailiffs. Their outstanding performance also earned excellent feedback from the judges and participants.

Mr Upham said encouraging students to participate in competitive inter-university contests was part of the University’s efforts to provide whole-person education. “Through this kind of exposure, students can further develop their presentation and job skills, learn how to apply their knowledge in a very practical way, and, most important of all, greatly enhance their confidence,” he said.

The eventual winner was the team from Queensland.