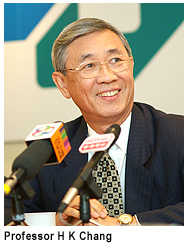 , President of City University of Hong Kong (CityU), announced on 27 March a new configuration of the University’s senior management that best positions CityU to face challenges ahead.

Outlining the new structure, Professor Chang said CityU has achieved a number of academic successes in recent years and built up a strong reputation. “Our preparations for the four-year curriculum are going full steam ahead and we are well underway with our plans for internationalization, the recruitment of mainland students and the promotion of applied research,” he said.

“Therefore, it is time to elevate the posts of Dean of Undergraduate Education and Dean of Research and Graduate Studies to accentuate the growth and importance of these areas,” Professor Chang added.

Professor Ho is currently working hard to map out a comprehensive four-year undergraduate curriculum, initiate outcome-based teaching and learning, and further internationalize the campus, while Professor Wong is leading the University to further develop innovative applied research for the benefit of society.

“All three are long-time colleagues with remarkable achievements in their respective fields. I believe, together with other colleagues, we can help CityU to scale new heights in our commitment to quality in teaching and learning, professional education and applied research,” Professor Chang said. 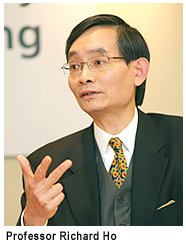 The three colleagues gave their full support to the new arrangements. Professor Ho said he was delighted to accept the appointment which would enable him to contribute further to CityU and higher education in Hong Kong. His plans include bringing together faculties and schools to prepare for the four-year undergraduate curriculum.

“Together we will design a range of innovative courses and programmes for our students," Professor Ho said. “In particular, we will focus on presenting cross-disciplinary studies to facilitate general education. At the same time, we will create a whole-person education environment that helps students to foster stronger language and communication skills, mature personalities and strong interests in lifelong learning - highly sought-after qualities in today’s fast-changing society,” he said. 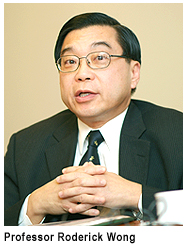 Professor Wong said he planned to build on existing foundations and achievements and further promote applied research and graduate education. Greater importance would be placed on cultivating a stronger research culture by recruiting outstanding research staff and helping promising staff and projects to fulfill their potential, he said.

“There will be greater emphasis on communication among research staff with an aim to develop a thorough understanding of CityU’s endeavours and strategies in applied research and graduate education,” he said. CityU would continue to transfer its research outputs to society by forging closer links with business and industries; and collaborating with like-minded mainland institutions would be high on the agenda, he added. 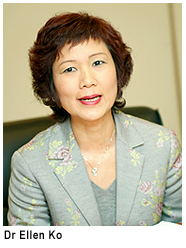 Dr Ko said she was honoured to be made Acting Vice-President for Administration. “CityU has a very stable, systematic and efficient administration. Building on this solid foundation, I will further enhance communication between administrative and academic departments. I am certain we can work together successfully to achieve our mission,” she said.

Professor Ho joined CityU in 1990. He was Head of the Department of Economics and Finance and Dean of Faculty of Business at CityU from 1990 to 2001. In 2001, he took up the provisional provost to head the then College of Higher Vocational Studies. In 2005, he was appointed Dean of Undergraduate Education to oversee the administration of undergraduate education. He is currently Professor (Chair) of Finance.

Dr Ko joined CityU in 1986. She has served on various administrative departments, schools and faculties including the President’s Office. She is an experienced administrator with a portfolio encompassing student affairs, course planning and validation, institutional accreditation, research grant approval, budget and manpower planning and monitoring.