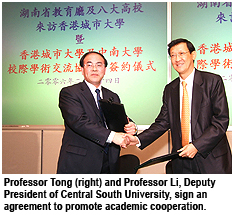 On 24 February, Mr Xu Yunzhao, Hunan Deputy Governor, led a party of 16 representatives from the Hunan Education Bureau and eight institutions from Hunan province to enhance mutual understanding with CityU. 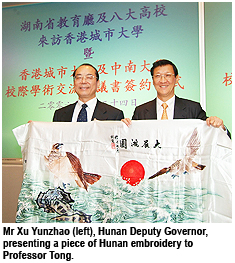 Deputy Presidents of CityU and CSU, Professor David Tong and Professor Li Guiyuan, respectively, signed an agreement that will initiate academic exchanges among scholars and researchers, and closer collaboration in research and teaching.

“In recent years, Hong Kong and the mainland have maintained similar approaches in promoting cooperation in academic and research among tertiary institutions,” said Professor Tong in his welcoming address. “CityU has developed a solid foundation with institutions in Hunan and we look forward to enhancing cooperation in the near future.”

Professor Li thanked CityU for its warm welcome, saying CityU and CSU were ‘brother’ institutions. “The brotherhood between the two universities is deep, sincere and honest, and so is the cooperation,” he said. 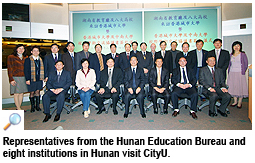 CityU has also set up teaching and research bases to expand professional education and applied research on the mainland. For example, the University of Science and Technology of China—City University of Hong Kong Joint Advanced Research Centre in Suzhou opened on 17 October 2005. The Shenzhen Outpost, located in the Shenzhen Virtual University Science Park and scheduled for completion within the next 24 months, will provide a base for CityU’s applied research, incubation and teaching activities on the mainland.