The road to becoming a top applied research university 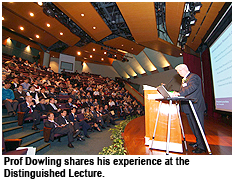 Universities are becoming even more important because of today’s knowledge-driven economy and enhanced competition throughout the world, according to Professor Patrick Dowling, former Vice-Chancellor and Chief Executive of the UK’s University of Surrey (UniS), which the University Grants Committee (UGC) recommended as a benchmark institution for CityU.

As part of CityU’s Distinguished Lecture Series Professor Dowling was speaking on 17 February at Wei Hing Theatre, where he was invited by Professor David Tong, CityU’s Deputy President, to share his experience with over 300 members of the CityU community, UGC representatives, industry leaders and other guests. 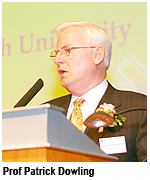 One of the first points Professor Dowling raised in his talk “The road to a first-class applied research university” focused on the greater expectation these days for research-led universities to contribute directly to the economic and social development of a region or a country. He said that because of “the rise of the new economies of China and India, it is recognized that developed economies in the West can only sustain themselves through knowledge transfer and innovation; and it is for that reason that most Western Governments are seeking ways to extend the contribution universities are making to national economic development. It is not surprising, therefore, to find in Hong Kong an increased emphasis on the delivery of user informed research.” 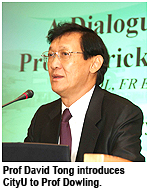 Professor Dowling talked about his experience gained over many years at Imperial College, London, and UniS where fundamental research thrives alongside applied research. UniS, he said, had positioned itself both as a research-led and an enterprise university enjoying highly productive relationships with industry and commerce. More than 500 companies, ranging from SMEs to multinationals, work with the University.

“Governments around the world acknowledge that world-class universities, through their research portfolios, contribute to regional and national economies and are now seeking ways to extend this contribution to national economic development,” he said. The UK government has realized that universities are central to creating a knowledge-based economy and play a major role encouraging enterprise. Professor Dowling noted that an emphasis on solving problems through applied research had benefited industries clustered around Cambridge and Oxford.

UniS, formerly a highly-regarded polytechnic in southeast London, has faced a challenging economic climate in the past, one similar to that which CityU faces today. Challenges have included a reduction in government per capita resources.

“Understanding the real world and close involvement with government, commerce and industry are key factors in the strategy developed by Surrey,” he said. In the 1980s, UniS set up the Surrey Research Park which houses 140 firms, employs 3,500 people and provides UniS with full-scale laboratory facilities that help hone entrepreneurial skills in order to better “understand the real world”. 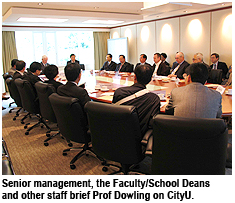 CityU is on the right track

The day before the lecture, Professor Dowling met CityU’s senior management and staff representatives to learn more about CityU’s role and recent major achievements in applied research. He talked with CityU’s academic leaders, administrative heads and departmental representatives and toured the Wireless Communications Research Centre and the School of Creative Media.

Professor Dowling said CityU was well on the way to becoming a first-class applied research university and that he was very impressed by the inventiveness of CityU researchers and the value of their potential contribution to Hong Kong industry and society. “I think CityU is very much on the right track,” he said. 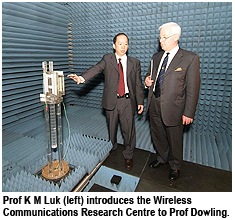 By meeting Professor Dowling, academic and administrative staff at CityU gained insight into areas such as the recruitment of quality faculty, measurement of performance in applied research, and strategies to promote a university.

Professors Dowling believes in the importance of strategic partnerships between universities with similar vision. Professor Dowling said that partnerships resulted from pooling intellectual property and through staff and student exchanges. Although he has retired, he said he would encourage his successor and colleagues to maintain close links with CityU. 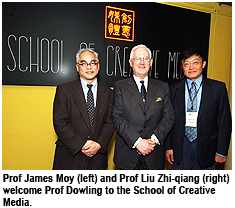 Professor Tong agreed with Professor Dowling in the importance of strategic partnerships and that CityU was firmly on track to becoming a top applied research university. “We have the resources, we have good people and the hardware is being further improved. Starting with such good foundations, I believe our development in the next five to ten years will be most rapid. We will build on our strengths and look forward to forming future strategic partnerships with Surrey,” Professor Tong said.