The combination of creativity and professional marketing knowledge granted Ryan Fung Ka-lok, a Year 3 student in the Department of Marketing (MKT), a second consecutive prize in the HK4As Student Awards.

The competition, organized annually by the Association of Accredited Advertising Agents of Hong Kong (HK4As) since 1990, is open to all local tertiary institutions. This year contestants created an integrated campaign to promote a new range of Toddler Trikes and Kiddi Bikes for a hypothetical toy company called “FreeWheelin”. 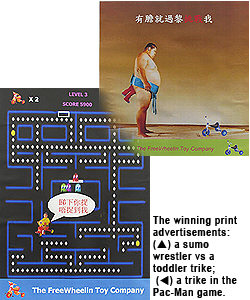 Out of over 200 entries, Mr Fung clinched the Bronze Award with his prize-winning project: two print advertisements to deliver the message of “Play hard. Play safe”. He won a Merit Award last year with two other print advertisements for promoting a series of different colour emulsions.

“I like reading magazines about advertisement design, but it wasn’t until I took part in the competition that I realised I had the potential to work in the creative media industry. The Integrated Marketing Communications course offered by the Department was a definite turning point for me,” he said, referring to a course he took last year.

In addition to the support from his family, Mr Fung said the help and guidance offered by Dr Fanny Cheung, an assistant professor in MKT, was key to his success. “I would like to thank Dr Cheung for giving me valuable advice, not only on my designs but also my career,” he said.

With two prizes two years running, Mr Fung is confident that he can pursue a successful career in the creative media industry after graduation.