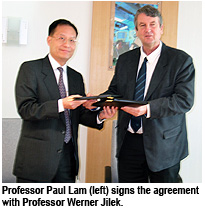 CityU’s Industrial Attachment Scheme (IAS) has expanded from to by entering into a collaboration with the Georg-Simon-Ohm-Fachhochschule, University of Applied Sciences (GSO-UAS) in . Both universities have pledged to look for industrial companies in their respective regions that will accept students for industrial placements.

Professor Paul Lam, Director of CityU’s Co-operative Education Centre, signed a memorandum of understanding with Professor Werner Jilek of GSO-UAS on 10 January. Both universities will exchange two to three students for industrial placement this year. German students will undergo industrial training in and the Pearl River Delta for a period of about five months, according to the requirements of the UAS; CityU students will undergo industrial training for two to three months in , in accordance with normal IAS arrangements. 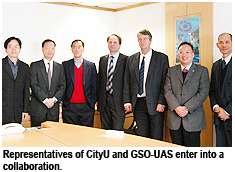 This is the second exchange agreement CityU’s IAS has signed with a partner university. Last year, the IAS signed a memorandum with the Office of Professional Attachments of the Nanyang Technological University (NTU) in , to exchange students for industrial attachment. The first batch of students from CityU and NTU will undertake their industrial training this summer. “Partnerships with overseas universities is an effective means of expanding our network with overseas companies,” Professor Lam said. “We will continue to expand our scheme through this kind of arrangement in the future.”

Launched in year 2000, the IAS provides industrial placement for students in prestigious corporations, mainly in and the Pearl River Delta. Last year, the scheme expanded to companies in and Kunshan on the mainland, and to . More than 1,100 students have benefited from the scheme since it was launched.