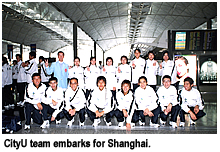 Sixteen CityU athletes are participating in the seventh All China University Games (ACUG), 28 August to 6 September, in . They form a significant portion of a 76-member joint delegation with athletes from 10 other tertiary institutions in at the nation-wide event, supported by the Hong Kong Post-Secondary College Athletic Association.

CityU’s student delegates will compete in track and field, table tennis, basketball, soccer and volleyball events. This year's ACUG, held once every four years (synchronized with the Olympic Games), is the largest ever. Some 3,000 top athletes from universities in more than 20 provinces and regions across the mainland are taking part. Among them some are renowned sportsmen. “The exposure itself is a valuable experience,” said Assistant Physical Education Officer of the Student Development Services Mr Gordis Yau, who led the CityU athletes to . “Participation in the event helps elevate our standard. Any prize or award we might obtain would be a bonus.” 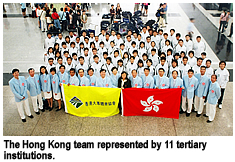 Mr Yau is the coach of CityU’s soccer players competing in the ACUG. He has led an intensive training programme for the past three months in preparation for the games: strengthening physical stamina of the players, and inviting professional soccer teams to hone their skills with the students. The seven CityU players form the backbone of the 18-member HKSAR mens' soccer team to compete at the ACUG. One of the CityU soccer players, Mr Yau Man-hon, said that participation in the ACUG gives him the rare opportunity to play in a team with top athletes from other local universities; as well as the valuable experience to compete with top soccer teams from universities all over mainland China.