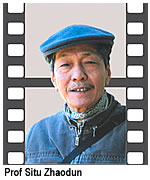 Documentary film is a dwindling art form in a world increasingly drowned out by Hollywood-style productions. How can a veteran director get a group of students hooked on the struggling art form?

Sunny Ng, a 27-year-old second-year student in CityU's Master of Fine Arts (MFA) programme, has never had any professional experience in making a documentary, except a brief stint as a producer of an MTV segment. He was trained in computer science and had worked as an IT consultant before joining the two-year full-time programme on media design and technology.

A film debut
At a private screening held in CityU President Professor H K Chang's residence at the end of December 2003, Ng's video narrative made an impressive debut, capturing the undivided attention of the selected audience of educators, film makers and cultural critics. It received a mixed reaction. The 35-minute video "The Weight of Years" chronicles the daily life of Ng's reticent father, with the camera following the 60-year-old mover to work and getting closer to him at home. The short piece opens with a soft plea from an eager son to an uncommunicative and often emotionally distant father for permission to record his activities on video--"Dad, can I make a film about you?" It ends with long bonding conversations between the two. To many of the professional video and film makers at the screening, the novice director's techniques--camera angles, lighting and sound quality--might still have been a bit raw, but none could deny his sincerity. All agreed that the emotional tension between the father and son was at times palpable.

Ng's work, in fact, started off as an assignment as part of the course requirements on documentary film at the School of Creative Media (SCM). In the end, however, it morphed into an audacious attempt on the part of the student to put into practice what his teacher instilled in him. Documentaries are about people and events, and documentary makers need passion. John Grierson, the father of documentary film, said, "Documentary is the creative treatment of actuality."

And the truth is Ng is not alone in being inspired by his teacher, Professor Situ Zhaodun, a Visiting Professor at SCM from September 2003 to early March 2004. Twenty-five other young men and women in his class, from a diverse background in sociology, journalism, biology, psychology, fine art, finance and physics, also took his teaching to heart. After a four-month intensive course on documentaries by Professor Situ, the MFA class produced 19 short films on subjects ranging from a sculptor ("Portraying City Heroes"), a French immigrant ("Nichole's Room") and an ice skating coach ("From Skate to Affinity") to stories on a part-time Cantonese Opera artist ("Man Lai Fung's Cantonese Opera") and a British voyager ("Adventure Under Sail"). All these were captured in digital video format.

"Almost none of the students had prior experience in film and video production," said Professor Situ from . "It's amazing and also satisfying that, within a span of just a few months, they are able to produce, from scratch to finish, a number of films that have shown so much potential in the mastery of subject content and aesthetic appeal." Professor Situ, dubbed the "godfather of documentaries" in , enjoyed a nearly four-decade career at 's premier film school and counted among his best students such internationally renowned directors as Zhang Yimou and Chen Kaige.

To celebrate the students' remarkable achievements, the SCM organized a mini-film festival "19 Lives Through19 Eyes" for public viewing in March. One local television station has shown interest in this batch of work and is arranging a few pieces for public airing later this year. The only hitch: obtaining the consent of the people featured in these short films. Some, who agreed to be featured with the full understanding that these were student projects, now hesitate and demur. They prefer their lives to remain private.

Documentary as reality
The students' works and their enthusiasm exceeded Professor Situ's expectations. As a Visiting Professor, he had a singular goal in mind: to lecture on documentary film and its production. Before he arrived, though, he was aware that, living under the influence of Hollywood-style productions, his students could be more interested in filming techniques than a yearning to tell a compelling story. Besides, most of them had no prior exposure to film training, and many were computer programmers. He was aware that, for his media-savvy students, form might take precedence over content.

"I always believe documentary films are about memories," said the lanky and spirited, professor with glint in his eye. "Without proper ways to retain history and memories, a culture is lost." The documentary is, after all, about real people and real events or scenarios, he told his students. The content or subject matter takes precedence over the format. "Doing a documentary," Professor Situ said in his first lecture last September, "is like living for a period of time with your subject. You are going to enter a somewhat romantic relationship; you have to know your partner well, perhaps, better than you know yourself."

Trying to observe and record the real world through the camera lens often opens one's eyes to oneself. "Home and Away", for example, a 35-minute video by MFA student Sheetal Agarwal, recounts the story of two Filipino maids through conflicts with her two Indian families, unraveling the intriguing world of domestic helpers in Hong Kong. In telling the story of foreign workers in , the business major turned graphic designer, came to realize that she, as an Indian living and working in , and her subject share a common destiny as foreigners in a predominantly Chinese city. The project helped her to understand her own situation. It was Agarwal's first video/film work, and now, according to Professor Situ, she is in love with documentaries and the video camera.

Professor Situ's course, over 11 lectures, was heavily illustrated with examples, work that he did in and other exemplary films and video clips from all over the world. One student wrote of Professor Situ, "He taught me how to think and observe." Students responded with unbridled enthusiasm, not only to his lectures, but also to his assignment: to produce a documentary in four months' time.

In the end, every work emerging from Professor Situ's class was focused on and its people, exuding a humanistic compassion for the indigenous people and culture. Though the filming and production techniques were still "rough around the edges," he said, "the students are hooked on the idea, at least from now on, their works will stay focused on the life and people around them." He quotes Japanese documentary film master Ogawa Shinsuke saying, "A documentary is a world created by the filmmaker and the object of his shooting."

"These films by students, as they are now, are not perfect," Professor Situ summed up, "but they are truthful and sincere in intention, courageous in outlook, full of fresh ideas and personal style." And Professor Situ succeeded, within a few months, in sowing the seeds of indigenous filmmaking in a university curriculum that aims to integrate technology with the art of storytelling. A passion has been nurtured and a trail has been blazed.