In an effort to expand CityU's academic exchanges and cooperation with institutions in Europe, President H K Chang and Dr Zhu Guobin, newly appointed Director of the External Liaison and Cooperation Office (ELCO), paid a visit to three prestigious universities in France, Belgium and the UK respectively, from 14-20 January. The trip successfully created a framework upon which to explore opportunities for collaboration between these European universities and CityU.

Three universities —University of Paris I– Pantheon Sorbonne, the Catholic University of Leuven, and the Imperial College of London, are all international institutions with a long history and tradition. All three, moreover, are actively reshaping and enhancing their roles in the higher education arena where niche strengths are emphasized. 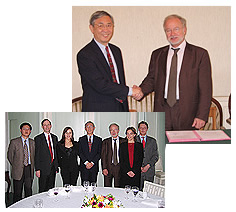 The elegation first visited the University of Paris I– Pantheon Sorbonne and was greeted by Professor Yves Daudet, Premier Vice-President. Professor Chang and Professor Daudet signed a three-year student exchange agreement, aiming to broaden the international horizons of undergraduate students by allowing them to study in each other's institution. Faculty exchange between the two universities already commenced in accordance with a cooperative agreement concluded in 2001.

After the visit, Professor Chang attended an international conference on recent developments in Physiology and Biophysics co-organized by the University of Paris XII- Creteil and Hospital of Henri Mondor and gave a presentation titled "Internationalization of Scientific Research: in memory of Professor Alain Harf". 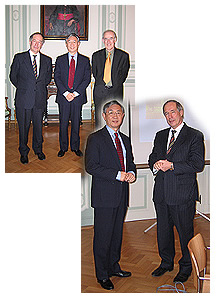 At the Catholic University of Leuven, Belgium, the CityU delegation met its Rector, President Professor Dr Ir A Oosterlinck, and visited a number of advanced research laboratories and facilities in the fields of biotechnology, nanotechnology, environmental science, medical research, and art. "Leuven is one of the top universities in Europe," said Dr Zhu. "We have identified several areas of common interest for researchers on both sides to work together. For example, their Faculty of Engineering has expressed an interest in working with us. This is an important step towards further collaboration." 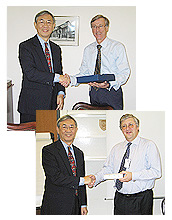 The last stop on the trip was the Imperial College of London. The delegation met its Rector, Sir Richard Sykes, and other senior staff members, and visited the Wireless Communications Research Group. A leading science, technology and medical university, the Imperial College is widely-recognized for wireless communication research, among many other areas of excellence. "There is good potential for collaborative teaching and research arrangements between the Imperial College and CityU that need to be further explored," Dr Zhu remarked.

The newly named ELCO (formerly the Academic Exchange Office) is responsible for exploring opportunities for student and staff exchange, joint teaching programmes, short-term training programmes and joint applied research and development work both on the Chinese mainland and overseas. Dr Zhu, Associate Professor in the School of Law, was appointed ELCO Director effective January 2004. "We hope to serve as a bridge between external institutions and CityU departments," he added, "We are committed to providing all the necessary support to our colleagues in implementing collaboration between CityU and institutions outside Hong Kong."

As of today, CityU has concluded 275 collaborative agreements with 177 institutions worldwide.