Outside, the wind was chilly, but inside the Chan Tai Ho Multi-purpose Hall, where the New Year Staff Party took place on 28 January, the atmosphere was warm. A jovial spirit captivated some 1,000 colleagues who gathered there for what has become an annual ritual of good fortune, fun and camaraderie.

"According to the Chinese calendar, 2004, the year of the monkey, augurs well," remarked Professor H K Chang, President, who kicked off the party celebrations by painting the eyes of the lion after the ceremonial dance. "Year 2003 was full of hardship and challenges for and CityU, such as SARS and budget cuts. However, with stamina and a spirit of cooperation, citizens and CityU staff have overcome many difficulties; good fortune is already coming our way... We have been given a new role statement and our staff, students and alumni made outstanding achievements. The community recognizes CityU's many invaluable contributions and accomplishments," he told the audience. After a sumptuous buffet lunch, everyone eagerly anticipated heart-warming blessings, entertainment by staff and students, musical performances by

Staff particularly appreciated the variety and quality of catering this year. Thanks to both the Finance Office's Campus Services Unit, Maxim's Caterers Ltd and the Facilities Management Office (for setting the menu, tables, decorations and other logistic arrangements), more than 30 types of Chinese food (including the deliciously fattening Peking duck), Vietnamese, Japanese and Western food 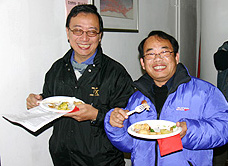 (Who ate all the smoked salmon Caesar salad?), were served. There were also more varieties of Chinese New Year pastries, vegetarian food and desserts than ever. The Multi-purpose Room was packed with contented gourmands, roving from table to table, whose appetites seemed to show no sign of abating during the hour-long feast.

anniversary logo and slogan ("Celebrating 20 years: University of a World City"); Professor Chang presented souvenirs to seven staff members who have served for 20 years, (Mr John Dockerill, Secretary to Council; Mr Paul Yuen, Reprographic Unit; Mr Chan Ming-kei, FMO; Mr James Ng, CITEX; Ms Rita Fung, HRO; Mr Albert Au, FO; and "Ping Tse", OP), with thanks for their dedication to the University; The Staff Association, with the help of Professor Joseph Lai's crooning and a cheeky slide show, invited the audience on a trip down memory lane, to revisiting some of the University's milestones of the past 20 years.

"Our staff is our most valuable asset and proudest achievement. You and your success is what makes CityU what it is today. Thank you for your support of me and of the University over the years," said the President in Cantonese, with a bow to all those present. Finally, he promised to keep the well-being of all levels of staff close to his heart. "Let's work together whole-heartedly and single-mindedly towards an even brighter future for CityU."