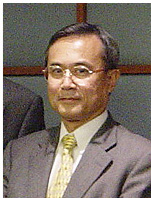 H.E. Mr Shotaro Oshima, Permanent Representative of Japan to the International Organizations in Geneva, honoured CityU with a visit to the WTO Dispute Resolution Centre (WTODR), accompanied by Consul (Economic Section) Daisaku Sugihara of the Consulate-General of Japan. This was the fourth visit by WTO representatives to the WTODR. On 21 October, WTO members accepted an invitation for the Sixth WTO Ministerial Conference to be held in Hong Kong, on a date as yet to be decided. The ministerial conference is the WTO's top decision-making body, which meets at least once every two years.

As part of his HKSARG-sponsored, week-long trip to Hong Kong to be updated on Hong Kong's latest political, economic, trade developments, Ambassador Oshima participated in a discussion on the WTO with Director of the WTODR and Chair Professor, School of Law (SLW), Professor Peter Malanczuk, and SLW Dean Professor Michael McConville. Among the insights he shared with those present, he reasoned that the perception of the recent WTO ministerial conference "setback" in Cancun was very dependent upon how it is characterized, (it has been labelled a 'collapse' and a 'fiasco' by the international media), and that he views the present situation as a mid-point, rather than the end, of negotiations. "It's like the Chinese story of the blind men describing an elephant," he said. "There are different perspectives. If we could have achieved an agreement regarding the issue of agriculture, we would have called it a success. Now, although it is not unachievable, it is, admittedly, difficult... People in Geneva hope to re-engage and look forward. We have not given up on concluding negotiations by January 2005."

The WTO has a diplomatic function

Topics of discussion ranged from what governments really want to achieve through WTO negotiations to whether or not the WTO dispute settlement mechanism has shifted to a legalistic mechanism in recent years. Ambassador Oshima also established that the WTO had "brought down the temperature" between Japan and the US. "The overall relationship is much better now, because spillover into the political arena from Japan-US trade frictions is controlled. With the advent of the WTO, epic battles have been brought to the negotiation table, and that alleviates the political atmosphere," he explained.

Professor McConville drew the session to a close, thanking the Ambassador on behalf of the School of Law. "In sharing his views with us, Ambassador Oshima personified the sensitivity and diplomacy required in international dealings," he observed. 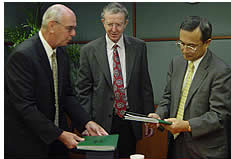 "I was excited about being here today," the Ambassador commented afterwards. "I always enjoy being in an academic setting; normally I am at the negotiation table, which is quite different, and so this was a welcome change for me. I was struck by the incisiveness of the questions, which indicates that people here are very much devoted to the matters of the WTO and I appreciate that very much."

Japan has been a member of the WTO since 1995. Ambassador Oshima, current Chairman of the Dispute Settlement Body of the WTO, and former Deputy Minister of the Japanese Ministry of Foreign Affairs (MOFA) began his career with MOFA over 30 years ago. A graduate (Jurisprudence) of the prestigious University of Tokyo, his illustrious career has encompassed roles such as First Secretary for the Embassy of Japan in the US, Minister at the Embassy of Japan in Russia, and Ambassador to Saudi Arabia.