Patience, understanding and LMX at work

While laws are in place to protect people and organizations from discrimination against objective variables such as age, ethnicity, and so on, the degree of "deep level" discrimination, based on subjective variables such as individualism, and levels of Co-worker Exchange (CWX) and Leader-Member Exchange (LMX), is the key, often unrecognized, predictor of an organization's performance.

A seminar by Professor George Graen of the University of Louisiana, Lafayette, on "Dealing with Workplace Diversity", 14 October, introduced the relevance of LMX theory and research to management and to organizational success. The event, presented by the Department of Management with the Centre for Innovation Management and Organizational Change (CIMOC), was well-attended by both students and staff, reflecting the increasing interest in cross-cultural collaboration at CityU and the need for advanced cross-cultural awareness.

"For Hong Kong to maintain its competitive edge, we have to be cosmopolitan, and so we bring in experts from everywhere in the world," Professor (Chair) of Finance in the Department of Economics and Finance Professor Richard Ho reflected. "In fact, at CityU, our faculty comes from a number of different countries; we get students from mainland China and elsewhere, also. That's one way Hong Kong's really ahead of Shanghai or Beijing, and we are truly part of a world city. To make the most of our diversity, we need to be culturally sensitive."

"Hong Kong's attempts to deal with diversity have been focused on the surface level so far," Professor Graen added, "while deep level diversity requires our attention today... If you're really going to be effective in an ever-changing society such as Hong Kong, you need diverse ideas and they're not going to come from people who all think alike. Old ideas need to be challenged."

Describing America's situation, "Being from the US, one of the most diverse countries in the world, it's evident that there are all kinds of differences among the cultures there, which creates all kinds of problems..." Professor Graen said. "The breakthrough idea is that there are two kinds of diversity, 'surface level' that you see right away, and 'deep level.' All the US laws deal with 'surface level' diversity, which means they're doomed to deal with stereotypes. What our research shows is that as you work with people over time, the surface level diversity becomes less important, while the deep level diversity emerges and becomes much more important. Deep level has to do with what kind of people we work with, how dependable they are, the values they espouse, and so on." 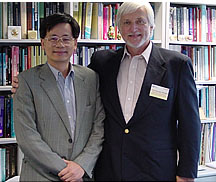 In his talk, Professor Graen explained that in the LMX management model, both the leader and the followers have a strong sense of self-efficacy and a strong self-concept. Of the 28 leadership styles available among Leader-based Multi-Factor and Relationship-based Leadership Options Exchange (LOX) models, the most developed are "Partner-LMX" combinations. However, with insufficient LMX working relationships in a departmental team (the effective minimum is 20%) its performance simply isn't very good; with 100%, on the other hand, the team is bound to be highly productive and competitive. Interestingly, the results of an Organizational Citizenship Behavior analysis comparing Western and Chinese samples have shown that leadership-related working relationships are the same.

Therefore, Professor Graen surmised, multicultural work teams probably do best under LMX management style and where there is awareness of deep level diversity. Mutual trust, respect and understanding are at the core of positive working relationships, the lack of which has a profound impact on productivity. An organization's management sets the tone through its choice of leadership style, and managers of departments or of teams must set the example they want employees to follow. Allowing latitude for and having the patience to develop understanding of deep level diversity is the way forward.

An internationally recognized consultant, researcher and educator in International Industrial and Organizational Psychology, Professor Graen has taught at the University of Illinois, (Champaign), University of Cincinnati, Keio University (Tokyo), Nagoya University (Nagoya, Japan) and the Hong Kong University of Science and Technology. For the last five years, he and his cross-cultural research and consulting team have been engaged in projects to understand joint venture businesses in China, Hong Kong and Taiwan and to help them build effective local "Third Cultures" to enhance their competitiveness.

CityU's newly established CIMOC is a research center that supports the development of new ideas, approaches and programs that will contribute to improving processes of value innovation in knowledge intensive industries, and to government policies and initiatives that will help firms in these industries to grow and prosper.