Adhering to the letter of the law?

For the international and local scholars who gathered in the Multi-media Room for the Law and Language in International Arbitration Conference (LLIA) 2-4 October, the letter of the law was shown to be ambiguous, if not downright perplexing.

Led by Professor Vijay Bhatia of CityU's Department of English and Communication, the conference featured presentations of research findings and discussion of the complexities of comprehending legal concepts and jargon for the purpose of dispute resolution. Scholars and legal practitioners alike acknowledged it is no easy task for arbitration laws to be translated and/or interpreted and enforced across cultural, national and linguistic boundaries.

In the Opening Ceremony's warm-up remarks, Professor H K Chang, CityU's President, spoke about his time in , "Land of the Queen of Sheba". Later, Professor C C Lee, Head of the Department of English and Communication, welcomed the participants by quoting a Confucius saying: "What a pleasure to have friends come from afar."

" has a long involvement with the issue of language and the law and is an ideal place to explore such issues. This particular topic is interesting," Professor Christopher Candlin of Macquarie University, (Australia), who was formerly a City Professor, commented, "because, although we didn't imagine we could gather so many international collaborators for our Generic Integrity in Legal Discourse project, we very rapidly got together some dozen partners in different countries, and, in a short span of time, we've produced a number of publications and forged a very good network."

In her Keynote Address, 's Secretary for Justice the Honourable Ms Elsie Leung, GBM, JP, created a backdrop to the 24 detailed sessions that followed: "The globalization of trade, industry and legal services will inevitably lead to an increasing number of disputes in multilingual and multicultural contexts. More international political issues are also being resolved by arbitration, and these may be complicated by linguistic or cultural differences."

Global perspectives on an ambitious subject
Professor Dr Peter Malanczuk, Director, School of Law and WTO Law and Dispute Resolution Centre (WTODR) spoke on "Mixing Legal Cultures in International Arbitration—Lessons from the Iran-United States Claims Tribunal" in which he recounted some outstanding incidents from his experience as Legal Assistant to the President of the Tribunal from 1986 to 1989. The procedure adopted by the Tribunal provided the first large test of the United Nations Commission on International Trade Law (UNCITRAL) Arbitration Rules. The lessons learned are highly relevant to today, he said, in its dealings with mainland and other parts of the world. Furthermore, the WTODR has 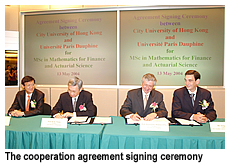 entered into a Cooperation Agreement with the WTO Reference Centre (Shenzhen) to undertake joint research, training programmes, publications, strategic assistance and to promote and Shenzhen in the domestic and international arena. They foresee developing working relationships with a number of European contacts as well. This Agreement promises to bear fruit in the very near future.

Highlights of the Conference included presentations by: Mr Fred Kan, Senior Partner of Fred Kan & Co. (HKSAR) on "Use of Chinese in Arbitral Proceedings in Hong Kong"; Professor Candlin and Mr Paul Cheung offering a sociolinguistic perspective with "Appeals to Authority in the Enforcement of Arbitral Awards"; Professor Jan Engberg of the Aarhus School of Business (Denmark) and Professor Dorothee Heller of the University of Bergamo, CERLIS (Italy) on "Vagueness and Indeterminacy in Law"; Secretary General, Hong Kong International Arbitration Centre, Mr Christopher To, whose paper focused on the importance of preserving confidentiality in international arbitrations; Ms Kusum Dhanania, NALSAR, University of Law, Hyderabad (India) providing critical discourse analysis of arbitration proceedings in International Commercial arbitration in India; Professor Yasunobu Sato, GSID, Nagoya University (Japan) on Japan's new Arbitration Law as based in a conciliatory culture, which served to update his book, Commercial Dispute

Associate Head of the Department of English and Communication, Dr Lindsay Miller remarked, "This is a really significant conference in that it brings together so many international people, and it's a manifestation of the interdisciplinary aspect of work at universities, where legal people cooperate with linguists, who cooperate with sociologists, who cooperate with all sorts of other disciplines. Once the network's set up, mutual efforts become much easier. Professor Bhatia, an international leader in his field, has been behind it all the way."

While the topic of language and law is ambitious and relatively new to some of the Conference participants, all agreed that the event had been a great success. "It's my first time to attend an event at CityU and this proved to be a useful conference for me, as I gained insights from a European angle in addition to the Asian perspective," Professor Sato commented. "I'm interested in how the law is actually applied in dispute resolution. Because language represents culture, without addressing cultural issues, a good international dispute process is not possible, so I found the theme very relevant. 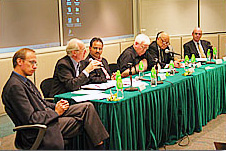 All the Conference attendees praised Professor Bhatia's hard work and superb results, who, in turn, thanked Jane Lung, a Member of the English and Communication Department's Outreach and Public Relations Committee, for her tireless assistance. "I must have heard her say 'No problem' at least 300 times," he quipped in his concluding remarks. "I am so pleased that everyone who was invited to the Conference originally planned for May and postponed due to SARS, was able to take part in one way or another. This Conference has been an opportunity to share our research and our combine our efforts. The success of the past three days spurs us on to further collaboration."

The interdisciplinary LLIA Conference was jointly organized by the Department of English and Communication, the WTO Law and Dispute Resolution Centre, Hong Kong International Arbitration Centre, and the RGC-funded project, Generic Integrity in Legal Discourse in Multilingual and Multicultural Contexts.