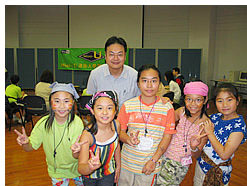 CityU opened its classroom doors to kids this summer, from 11 to 22 August, offering a Mini-U summer certificate programme for Primary Three to Primary Six students. The programme, organized by CityU Professional Services Ltd (CPS) and WiseNet Co, a Hong Kong-based education services company, attracted more than 50 children, aged 8 to 12, who enjoyed their first taste of university life on the CityU campus.

This year, the summer vacation period for most Hong Kong primary schools was cut short due to SARS, causing many parents to cancel plans to send their children to summer camp overseas. "That reinforced our impression that Hong Kong needs more creative summer programmes for kids-the kind that will allow them to learn as well as have fun," said Mr Lawrence Ma of CityU's Division of Commerce. Mr Ma, the Mini-U manager, is also Group Director of CPS's Ecommerce & Internet Consulting Group, which initiated the programme. Other members of the Group are Ms Teresa Choi and Mr Paul Chan, from the same division. 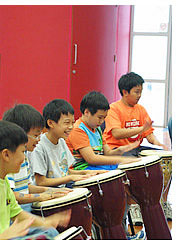 The MiniU programme stands out from similar summer programmes, such as swimming or mathematics camps, as a unique opportunity to get an idea of what university is like. "The teachers told us that university students don't just sit and listen. They talk when they have something to say. I find this special," said nine-year-old Yeung Tin Chi, a Primary Three student at Beijing Chongwen Primary School. His parents sent him from Beijing to take part in the programme.

Mini-U's curriculum was based on insights into what children should know these days and how they learn. The children were exposed to as many as 10 workshops, including African drumming, calligraphy, design, Digital Video production, music composition, martial arts, and theatre, in the short span of two weeks. The design of the programme encouraged the students to develop their multiple intelligences using skills such as logical, critical and creative thinking, imagination, expression, observation, organization and problem solving. 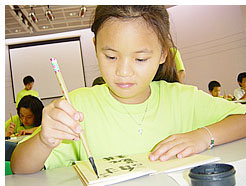 An evaluation on the student's performance was also built into the programme. "We believe that every single child has his or her special talents and potential. One of our programme's major goals was, through our evaluation, to help the parents learn about their children's potential early, to nurture those talents and develop their potential," said Ms Choi.

CityU's CPS, an affiliated, non-profit company, was set up in 1998 to channel the University's technological power in order to contribute to the growth of Hong Kong's economy. It is managed as a professional consultancy firm with full accountability to its clients.