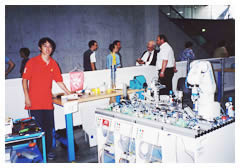 "This has been the best experience in my whole life, so far," Mr Yeung declared, "It was so exciting!" He says that much of his present success is thanks to Manufacturing Engineering and Engineering Management (MEEM) lecturers such as Associate Professor Dr Alexandar Jjordjevich, who taught him well, and competition trainer Dr Ho (VTC staff), who encouraged him to join a dragon boat team to strengthen his body as well as to relax. Mr Yeung is "polite, and eager to learn new things," according to MEEM COI Ms Eva Cheung, and these qualities have helped him to gain the support of fellow students and university staff. Goal-oriented, too, Yeung's desire to compare his ability with that of others spurred him to reach beyond Hong Kong and enter the global WorldSkills competition, in which over 20 nations participated this year.

Established some 50 years ago as the "International Vocational Training Organisation" (IVTO), WorldSkills--a worldwide organisation for the promotion of vocational training, organized the competition in St Gallen, affording Mr Yeung the chance to visit Switzerland. "Switzerland was beautiful, and the natural, green surroundings made me feel great," Yeung said, despite the four exhausting 8-hour days of intensive work with his teammate, Simon Lai (whom he met at the VTC competition last year), applying their combined knowledge of computer programming, mechatronics and electronics, "I was very nervous on day one, but I became less so as I concentrated on what I was doing."

It seemed to Mr Yeung that one of his most formidable rivals in the competition was the "fast-working and clever" Singapore team, which ultimately became Champion. His advice to future contenders is to "practice or train much more in all three areas; obtain a wide range of knowledge and various kinds of computer programming." Yeung's team achieved the rank of 16 out of 25. Yeung also took pride in "touching the Hong Kong flag for the very first time" as he represented Hong Kong abroad. Now back in Hong Kong, his "Excellent" certificate remains lovingly protected within its special, decorative folder at home, where he will display it for friends and family from time to time.

Mr Yeung currently studies multimedia at CityU and is interested in animation and video-making. "I'm thinking about which direction to go in--engineering or multimedia" he said. He looks forward to the future, and hopes to put all his skills to good use in a career after graduation next year. Meanwhile, his family gives him continuous encouragement. "I've known you had this kind of ability ever since you were a little boy," his father told him--words that Yeung can bring to mind when he faces his next challenge.