A question to Premier Wen Jiabao

CityU's Chinese Civilisation Centre just launched the Chinese Culture Quarterly as part of its fifth anniversary celebration. On Sunday, using the journal as a starting point, CityU President, Professor H K Chang, posed a question to Premier Wen Jiabao about the importance of exchanges between and mainland . This was reported in a number of local newspapers such as Apple Daily, Hong Kong Commercial Daily, Ming Pao, Sing Tao Daily News, Ta Kung Pao and Wen Wei Po. The following excerpt has been translated from the original article in TA Kung Pao, 30 June. 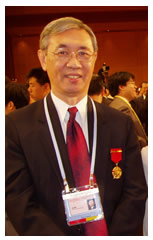 Professor H K Chang: The two gentlemen who just raised questions are both from the industrial and business sectors. Mr James Thompson, the latter, talked about intellectual property. I am H K Chang, the President of City University of Hong Kong, and I am in a knowledge-based business. Today, I happened to bring along a book with me, thinking that if the situation allowed I would give it to you. This book is an academic journal, titled Chinese Culture Quarterly, which was just launched the day before yesterday. It is co-published by CityU and . On its cover, a poem written by a Qin Dynasty poet, Gong Zizhen, is quoted. Coincidentally, you quoted a Qin Dynasty poem, written by Huang Zunxian, in your speech. But, of course, they are not the same poem. I wonder if I can read the one by Gong Zizhen aloud and ask the Premier to give us his views on it. This Qin Dynasty poem is very widely known. It ends with: 'Allow me to urge the ruler of heaven to revitalize us by creating talent of all kinds by any means.' In responding to the CEPA agreement signed today and the speech you delivered earlier, could you please give us your views on exchanges between Hong Kong and the mainland, especially on our university education and the cultivation of talent, as well as the arrangement of the visiting and cooperation of university academic staff. Thank you very much.

Premier Wen Jiabao: The President just pointed out a very important issue. In the end, what are the pivotal means of exchange between the mainland and ? They rely essentially on people, on knowledge, and on science and technology. As the Gong Zizhen poem, quoted by the President, says: 'allow me to urge the ruler of heaven to revitalize us by creating talent of all kinds by any means,' I hope that both the mainland and will come up with a strategic plan for the enhancement of the development of expertise and professionalism. We will not only have to work very hard in developing our own human resources, we will also have to establish a comprehensive policy to attract foreign talent. The constant boom of foreign and local talent, and the constant alignment of this talent is the benchmark of the prosperity of a nation and a region. Let's try our best to cultivate human resources, to attract foreign talent, to retain foreign talent, and to foster a good environment for everyone's contributions. How's that?