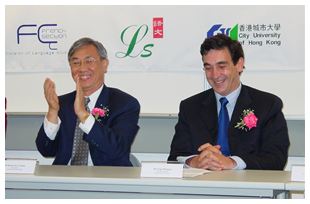 Last month, 22 outstanding foreign language students were awarded scholarships and sponsorships at ceremonies organized by CityU's Division of Language Studies (LS). At the French Awards Presentation Ceremony held on 16 May, 12 French programme students were recognized for their outstanding academic studies. The following week, at the Korean Scholarship Award Ceremony on 22 May, a further 10 exceptional students were given the chance to engage in an intensive Korean language programme in Seoul this summer.

After a year of serious effort, 10 students with significant improvements in their French studies received their reward: each of them was granted a HK$6,500 sponsorship for two weeks of study in France. 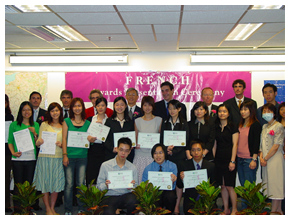 Honoured with prestigious Consulate General of France in Hong Kong scholarships worth over HK$10,000 each for a one-month study programme at the Centre International d'Etudes Francasies of the Universite de Bourgogne in Dijon in France were Miss Zoe Lee Tak-nga, a year two student in the School of Creative Media, and Miss Constance Law, a final-year student in the Department of Chinese, Translation and Linguistics.

"I am looking forward to this study trip, which I'll use to learn about French language, culture, history and art. Certainly, I won't skip the many famous museums and wonderful scenic spots in France!" said Zoe, a French film aficionado. "It's really a fulfilling experience learning French at CityU. I'd like to thank my teacher, Mr David Santandreu, Lecturer in the French section of LS, who tries different ways to encourage and motivate us to practice French." 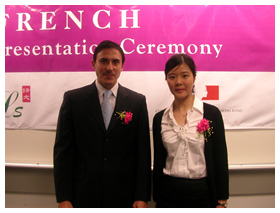 Also eager to have a taste of the French lifestyle this summer is Constance, who has never been there before. "I'm so glad to be given this valuable opportunity to stay and study in France. I hope to make friends with the people there and learn about their customs and culture," she remarked. Constance developed her love of French when she was a child. It's laudable that students like Constance are able to complete the whole French programme, from Level I to IV, with flying colors. In addition to French, she also learns Korean and Japanese. Last year, she won a scholarship for a Korean study trip. 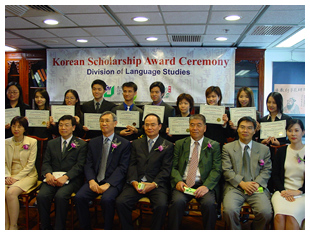 Ms Kang rejoiced, "We are delighted to see our students' continuous efforts to improve their Korean, and we are grateful to the Korean Resident's Association (Hong Kong), Kyung Hee University and the Consulate General of Republic of Korea in Hong Kong for helping our students strengthen their language ability and broaden their cultural perspective."

"I would like to thank the Korean Resident's Association (HK) and Kyung Hee University in Korea for their support," said Professor H K Chang. "I am also extremely glad that we have so many dedicated teachers to help our foreign language students achieve so much at CityU."