School of Law reaches out to the mainland

"It's the first legal text written and compiled by Western academics with China's law reform in mind," said Professor Mike McConville, Dean of the CityU's School of Law (SLW), at the book launch of the English Criminal Justice Process, in Beijing on 11 April. "The book gives a comprehensive account of the structure of criminal justice in England and related issues," he added. "We hope it will contribute to the rich discussions already taking place in China and help China continue to improve its legal system, especially in the area of criminal justice." 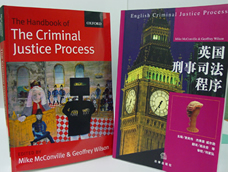 A six-member delegation from the SLW, led by Professor McConville, flew to the capital on the evening of 10 April for a series of events to launch the book and to promote the School of Law and City University .

The book launch for the Chinese version (in simplified characters) of the English Criminal Justice Process attracted a host of important players from Beijing's legal community. As part of the School's China Outreach Programme, English Criminal Justice Process was edited by Professor McConville and Professor Geoffrey Wilson, founder of the University of Warwick's Law School. The translation work was coordinated by Professor He Jiahong of Beijing's Renmin University School of Law, and published by China's most distinguished law publisher, Legal Press. The book, written specifically for Chinese readers, was sponsored by the Geoffrey Wilson-David Li Innovation Fund, which aims to encourage the study of comparative law worldwide.

OIt has been one of the School's major focuses for years to reach out to the mainland and build stronger ties with the legal community there," said Dr Zhu Guobin, a member of the School's Beijing delegation and Director of International Relations at the SLW. "With ties between China and the world getting stronger, legal professionals in Hong Kong and the mainland need to be familiar with both Chinese and international law." The SLW has found that its Chinese law programmes are proving increasingly popular with students from both Hong Kong and China. The School has also launched dual programmes for mainland students, allowing them to study in law schools overseas. "To improve and promote our courses and attract more mainland students, we have to expand our network in China ," Dr Zhu added.

The busy Beijing itinerary included a talk by Professor McConville at Renmin University and a reception to inaugurate Friends of the School of Law . "The Friends scheme was established this year to give a head start to our activities in mainland China," said Professor McConville. "While we remain committed to conventional methods of promotion, we consider it vital that our programmes are well-known in China and promoted on a personal basis." The School's "Friends" comprise present and former staff and students, as well as those who have worked with the SLW in one capacity or another. Professor McConville hopes that the scheme can help promote the School's Programme and further facilitate the School's research in the field of comparative law. Over 30 guests attended the inaugural event.