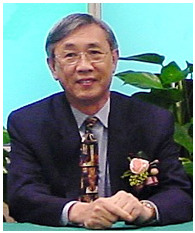 CityU's President, Professor H K Chang, talked today about the one topic that has grabbed the whole city's attention and got on everyone's nerves over the past five weeks: SARS, or severe acute respiratory syndrome. Professor H K Chang said he was sad that the side effects of the epidemic outbreak of atypical pneumonia in Hong Kong have hurtled the local economy and people's livelihoods into near chaos, not to mention emptying school classrooms and university campuses. He added, however, that there are important lessons to be learned from the unfortunate events.

Often, people-especially those charged with leadership responsibilities-fail to pay heed to the signs of the first trickles of trouble, before they converge into a stormy deluge, Professor Chang said. "Some people plainly let their guards down in the face of danger." That's what happened at the beginning of SARS outbreak, when the virulent virus made the leap out of the Prince of Wales Hospital into the community. "A certain laxity in attitude, and sometimes even a refusal to confront reality, has too often blunted our sense of crisis," said Professor Chang. Once the situation appears to be getting out of control, however, the same people may start to panic, throwing away calm and common sense, and allowing themselves to slide into gloom and despair. The unhappy incidence of SARS in Hong Kong, he said, shows that a lot of people in Hong Kong were "fluctuating between the two extremes" of heedlessness and nervousness.

Fortunately, CityU behaved differently. On 14 March, only a few days after the first signs of a potential viral outbreak hit the newspaper headlines and radio airwaves, CityU resolved to act. An Ad Hoc Group, with representatives drawn from a spectrum of academic and administrative departments and chaired by Professor Y S Wong, Vice-President (Administration), was convened. Professor Wong was charged, with the full support of the University's resources, with monitoring (and preventing) the possible spread of SARS on campus and coming up with a range of contingency plans. Within the short span of four to six weeks, the Group covered a lot of ground: campus cleaning and disinfection, leave arrangements for confirmed patients and those in close contact with the infected, sourcing and distributing face masks to students and staff, class suspension and resumption arrangements, obtaining infra-red temperature probes to be used on students entering an examination, were just a few of the Group's resolutions. All in all, consideration for public health has, for now, taken precedence over everything else in ensuring a safe and hygienic campus. The result: the spread of the viral attack on campus has been kept under check and the number of infected cases has been kept to a minimum. Professor Chang said that the CityU management, in a time of great difficulty, has committed itself to an open and full information disclosure policy, in addition to concentrating on early detection and swift action. Cases were reported promptly and accurately once they were confirmed with the authorities, and guidelines and contingency plans were drawn up and communicated to all staff and students through emails and the Web. "I think CityU has done a good job in SARS prevention and management," said Professor Chang. The University ensured that pertinent information was readily available to allow our staff and students to be fully prepared for likely scenarios and action that needed to be taken. "It helps to build up our credibility and stamp out rumours, making everyone feeling more at ease." (This is, of course, built on the basis of years of development of our IT facilities and IT savvy of our staff and students.)

The second lesson, Professor Chang explained, was to encourage and rally everyone-staff and students-to join in the fight against SARS. Not only is there a range of representatives on board the Ad Hoc Group, it has also on numerous occasions consulted departmental liaison officers, mostly programme leaders, on a range of academic issues, such as timetabling for make-up classes, class resumption and, most recently, examination arrangements. Professor Chang said, from what he could see, the policy of wearing face masks on campus has been met with strong support. "Most of our staff and students have accepted it because they feel more comfortable in themselves. They are also being considerate to the others on campus."

All crises end one day and Professor Chang hopes the viral outbreak will be over soon. By then, our attention will return, as before, to the economy and the budget crunch. With our lessons from the SARS saga still fresh and vivid, we should neither be unconcerned about nor overly wary of the budgetary problem. Even though funding for the current triennium 2001-04 has been largely provided, the situation in the roll-over year 2004-05 and in the next triennium-2005-08-can no longer be assumed on a "business-as-usual" attitude, without due consideration and forward planning for the impending cuts. Likewise, Professor Chang said, we should not slide into a state of panic, worrying excessively at the expense of attending to our normal work and stated mission, or forgetting about our achievements so far. On the last point, the President reminded all staff that the year 2004 will mark our 20th anniversary, an important milestone and occasion for the University community to take stock and celebrate. In May, he will announce that he will personally chair an organizing committee, with some members nominated from the Management Board and others invited from our group of "old friends". So far, Professor W K Kam, former Vice-President, and Mr C S Chan, former head of the Language Studies Division, have gladly agreed to be on board. Even if the future is a bumpy ride, Professor Chang said, we should be prepared to get on with our business as normally as possible, with the same resourcefulness, resolve and stamina as before. "I believe we have to look out for every possible twist and turn of events down the road but at the same time we also have to remain steadfast to our core work and mission, even at times of great uncertainty," Professor Chang concluded.