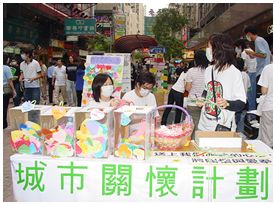 While many people are staying at home because of the Severe Acute Respiratory Syndrome (SARS) outbreak, more than 40 CityU social work students set up a "City Care" booth at the in Mongkok from 12 noon to 9pm on Saturday, 12 April. In addition to paying tribute to the front-line medical workers and cleaners for their courage and hard work, the "City Care" project aimed to rally community support to fight against SARS.

"Care, support, and encouragement are the three salient features of our project. Amid the economic hard times and the threat of SARS, we want to make people aware of the contributions of doctors, nurses, and cleaners in protecting our lives. We also urge people to be sympathetic to the residents, as well as to be supportive our friends and relatives in a difficult time," said Mr Keith Wun, a third year social work student who helped coordinate the activities. The idea for the "City Care" project, which was organized within just three days, came from a casual chat between Mr Wun and his peers. They appealed to their fellow students via email, who responded with a deluge of positive and creative ideas. To express their thanks, students wrote more than 1,000 greeting phrases, each stapled on a pink greeting card, and prepared numerous heart-shaped coloured cards for supporters to fill in their own best wishes. A 20-person chorus was formed to sing inspiring Cantonese pop songs such as "Below the Lion Rock", which attracted many passers-by to stop and give their support.

The team's high spirits were bolstered by the rounds of applause they received from passers-by. "Instead of staying home, we opted to do something positive, especially when many people are so depressed," Mr Wun said. More than 3,000 greeting cards had been filled in by the end of the day. 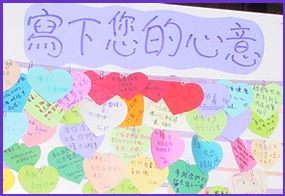 "I'm very impressed to see a group of young people taking the initiative in organizing this event. We really need such an occasion to express our heartfelt thanks to the people who have helped to fight against SARS during the past month," said Ms Li, a passer-by who jotted down "Never Give Up" on a greeting card.

"We hope this first move will prompt people to care more about our community," Mr Wun said, adding that since the SARS outbreak he has shown more concern and care for the health of his family members. He said the two-week suspension of classes had been a good time for him to reflect on the SARS outbreak and what he, as a social work student, could do for society. "The threat posed by the virus has brought about something positive: people have come to treasure their relationships with family members and friends. However, more has to be done.We hope to make use of this opportunity to encourage Hong Kong people to care more about others and make a concerted effort in re-building confidence," he said. 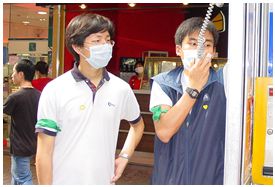 The public venture in Mongkok is only a start. The "City Care" voluntary team will send the thank-you notes to the Queen Mary and Prince of Wales Hospitals. Mr Wun also plans to work with social welfare organizations and organize educational campaigns in housing estates, handing out information on the disease and the precautionary measures which can be taken, and promoting a caring attitude towards SARS patients.

On 14-15 April, the team set up a booth in CityU's to give students and staff the opportunity to write their own greeting cards. Mr Wun attributed the success of the "City Care" project to his group's team spirit, and the support and advice they received from alumni, teachers from the Department of Applied Social Studies such as Dr Elaine Au and Mr Kam Ping-kwong, and CityU's Student Development Services.