Smaller, harder and better: The race for nanocomposite coating

In an age when nanotechnology is hailed as a milestone in the advancement of science, when there is a demand for small appliances, when instrumentation allows the preparation of things small, when there is the equipment to characterize small things, to measure the structure and properties of small things, and when nano particles allow improved properties, it is natural that coating technology will form part of the trend.

Joining the race for nanocomposite coating

In search of a new coating that can overcome the limitations of traditional coatings and provide better performance, scientists worldwide are investing their efforts in a new superhard coating: nanocomposite coating. City University is no latecomer to the race. With a grant of HK$7.3 million from the HKSAR's Innovation and Technology Commission, and sponsorships from the Hong Kong Mould and Die Council and the Hong Kong Metal Manufacturing Association, CityU's Advanced Coatings Applied Research Laboratory (ACARL) has launched a project on the development of nanocomposite coatings for the manufacturing industry. Collaborating in the project are Professors Haydn Chen and Paul Chu from the Department of Physics and Materials Science (AP), and Dr Edmund Cheung , Dr Lawrence Li, Dr Shen Yaogen and Dr Zhou Zhifen g, from the Department of Manufacturing Engineering and Engineering Management (MEEM). "Research on nanocomposite coating is a relatively new field and I think this is the only project in Hong Kong supported by the Innovation and Technology Commission," said Professor Chen.

The need for a superhard material 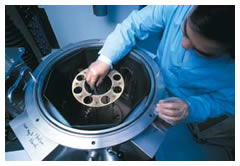 Nanocomposite coating is a comparatively very hard material with a hardness exceeding 40 GPa. Its hardness is 40% of that of natural diamond (100 GPa), a material believed to be the hardest in the world, double that of titanium nitride (TiN) which has a hardness of 20 GPa and five times that of high speed steel which is 5-7 GPa. GPa is an international unit of measuring force and pressure, and thus, by extension, an indication of the hardness of materials. One GPa equals 109N/m2.

For tribological applications, adding a hard coating, for example TiN, or diamond-like carbon (DLC) coating, on a surface will increase the wear resistance of tools and prolong their life span. While the hardness of a coating is of prime importance, the adhesion, oxidation resistance, and low friction coefficient cannot be overlooked.

Despite their hardness and wide applications, the two popular hard coatings, DLC and TiN, ave some limitations. DLC coating, a carbon-based coating, has a high hardness and low friction coefficient, which is excellent in extending tool life when cutting most materials such as plastic and glass. However, it cannot be used to cut materials containing iron because iron dissolves carbon. In addition, DLC coating is ineffective for high speed cutting when the temperature exceeds 400C to 500C. TiN, a relatively hard material of 20~30 GPa, has been in use for 20 years. It has a very wide application in decoration and cutting machinery, said Dr Zhou, and today almost 50% of hard coatings use titanium nitrides. The only problem with TiN is its low oxidation resistance at high temperatures: it will oxidize in an environment with a temperature over 500ûC.

Superhardness determined by composition and microstructure 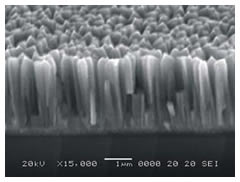 One of their projects is to add silicon to titanium nitride to improve its hardness. This was done in Germany several years ago by using PVD magnetron sputtering. The research team has adopted the same method at CityU and has discovered that by adding 7Ð10% of silicon, the hardness is increased.

In addition to composition, the superhardness of the coating is determined by the microstructure. In order to achieve superhardness, Dr Zhou explained, there must be a nanostructure, that is, the particles making up the coating must be in the nanoscale (10-9 , or one thousand millionth of a metre). "When the size of the particles reaches the nanoscale, they display special physical, chemical, and electronic properties," said Dr Zhou. He cites copper as an example. Copper is a conductor but if it is given a nanostructure, it will become non-conductive. "It's exciting not just because the size is nanometric but because of the new properties and the new effects that arise when the particles of the coating's microstructure become small," said Professor Chen. 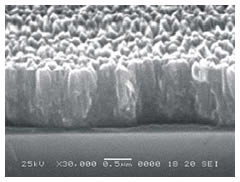 In addition to greater hardness and improved wear resistance, nanocomposite coating is superior to TiN in its resistance to oxidation at high temperatures. It is thermodynamically stable and thus avoids the problems of high solubility of carbon in iron, as found in DLC coating. Since the deposition temperature is below 400~500C, it can be used in many materials, such as steel which softens at 800ûC, and the simple deposition processes make it easier for industrial application.

The joint project on nanocomposite coating, which commenced in April 2002, will last for three years. Other collaborators include Teers Coatings Ltd, UK; General Motors; the University of Illinois, US; Sydney University, Australia; the University of Tokyo, Japan; and SurfTek, Taiwan. "Our first target is to develop a nanocomposite coating which reaches the superhardness of 40 GPa," said Dr Zhou. "And so far the results are very promising as we have already developed something very close to 40 GPa."

According to Dr Zhou, they have also conducted tests on the durability of a drill with nanocomposite coating and the results are also promising. In a hostile environment, a drill without nanocomposite coating can make no, or minimal, holes but if a coating is added, it can make 200 holes. "But what we are doing is still at the laboratory stage, it still requires a lot of tests before it can be scaled up for applications," said Dr Li.

Exploring use in high-speed cutting

When the superhardness target is achieved, the research team will proceed to characterization testing to study the adhesion between coating and substrate, because no matter how hard and good the coating is, it must also adhere to the substrate. Tests on wear resistance and its application in high-speed cutting will follow. 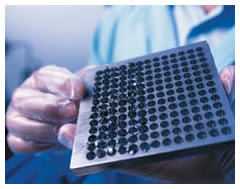 As for whether nanocomposite coating is superior to, and will ultimately replace, traditional coatings, both Dr Li and Professor Chen said that it will depend on applications. "It may be good for some processes but not for all," said Dr Li. "We need different coatings for different purposes, so you can never say one is better than the others," said Professor Chen. For tribological applications, people look for hardness and wear resistance; for watch manufacture, they look for colour; for solar cells, they want transparency and conductivity. "We can compare the coatings if they're used within the same range of functionality and application, but not across applications," he added. "You can't compare an orange with an apple."

Nanocomposite coating is a relatively new field and research worldwide is still at an early stage. Most of the research focuses on understanding the superhardness and the structure of the coating; the study of its industrial applications is still limited. "We hope to provide some information on the composition of this new material and ultimately develop it for use in very harsh environments and high speed dry machinery," said Dr Zhou. Be it in the area of basic or applied research, nanocomposite coating is without doubt an area well worth exploring.