Some of the world's leading experts on Islam from , the , , , the , the and joined scholars at from 28 November to for the first large-scale symposium on Islam held in and the first worldwide comparative discussion of Islam in and . "Islam in Southeast Asia and China: Regional Faithlines and Faultlines in the Global Ummah" was jointly organized by CityU's Faculty of Humanities and Social Sciences, Southeast Asia Research Centre, Centre for Cross-Cultural Studies and Chinese Civilisation Centre. 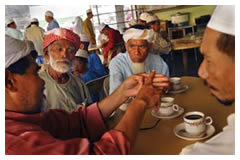 Delivering the opening address, CityU President Professor H K Chang shared with the audience his reasons for his interest in Islam. There are three main reasons, Professor Chang said: his personal contacts with Muslims, which began when he was a child in Shandong province; the speed at which Islam spread during the seventh and eighth centuries AD and the contributions made by Islamic societies; and the manner in which various non-European societies have responded to the dominance of European culture in the past few centuries. How Islam evolves, Professor Chang believes, will impact on the development of the entire human race.

The symposium's keynote speech-The Changing Character of Islamism-was delivered by Professor Fawaz Gerges, Christian A Johnson Chair, International Affairs and Middle Eastern Studies, (). His focus was not on Islam in , Professor Gerges explained, but rather on jihad, the revolutionary established movements in the heartland of Islam: the Arab world, including , , and . 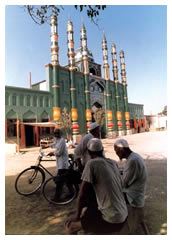 Professor Gerges examined the changes in jihadi Islamism over the past 22 to 25 years; how the shifting internal dynamics of Islamic jihad resulted in a change of focus from fighting the internal enemy to fighting the external enemy, particularly the US; and current trends in Islamic thinking and practice. "The last 15 months or so have seen the emergence of a new constellation of forces," Professor Gerges said, "a broad coalition of not just Islamists but Islamists, nationalists and secularists who put a higher premium now on standing up and opposing US foreign policies than on continuing the struggle against the local internal enemy."

This contrasts with the situation at the end of the 1990s, when the existing Muslim states had succeeded in strategically defeating jihadi Islamist movements in the battlefield in almost every single Middle Eastern country, especially Egypt and Algeria. "Two of the most important reasons for this lie in the inability of jihadi Islamists to cultivate and sustain a strong social base in their countries," Professor Gerges explained. "And also their impatience and obsession with capturing power regardless of the consequences to society." Without public sympathy and support, Islamist foot soldiers could not withstand a prolonged confrontation with the authoritarian Middle Eastern states. This resulted in deep fragmentation in the rank and file both inside and outside their own countries, and also in their splintering into more extreme cells and factions, for example in Algeria.

"One of the dominant themes in Islamist ideological thinking from the mid-1970s to the mid-1990s was that dislodging the internal enemy should take precedence over the external struggle against the US and its crony, Israel," Professor Gerges said. "Everything paled by comparison to establishing the Islamic state and Allah's kingdom on earth." But by the mid-1990s, it was evident that the existing Muslim governments were durable and the radical Islamists could not match the power of most Middle Eastern states. For some, a way out had to be found: "a new global crusade to save face and rescue the sinking Islamist ship." Added to this was the fact that with the end of Afghani resistance against the Soviet Union, thousands of young jihadi fighters became entrapped in either Afghanistan or Pakistan, or joined jihadi causes elsewhere. "This led them to shift their focus from the domestic to the international arena." 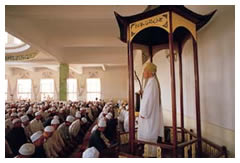 However, although militant Islamists rationalized their dramatic ideological shift by declaring the crusade against the US was an extension of the fight against the internal enemy because the US provided the political and military support which sustained the existing political order, most jihadi Islamists in Algeria, Palestine, Egypt, Lebanon and other countries, including East Asia, rejected the shift in focus and refused to join the war against the US and Osama bin Laden's crusade against the West. "In fact, the top leadership of Islamist groups in Egypt, Lebanon, Jordan, Iran, Indonesia, and, of course, leaders in exile, made it very clear that bin Laden's terrorist methods not only endangered the Islamist movement as a whole but also the interests of the Muslim ummah as a whole," said Professor Gerges.

The stereotypical notion that Osama bin Laden and his followers represent either the mainstream Islamist movement or even the militant Islamist movement is not based on fact, Professor Gerges believes. "This is one of the misunderstood themes of post-9/11. In fact you could argue that their call for a jihad fell on deaf ears throughout the Islamic world. This fact has been overshadowed by bin Laden's inflated rhetoric, the recent threats against Westerners, the escalating Arab-Israeli conflict, and the coming war against Iraq."

With the exception of a few fringe elements, the majority of jihadi Islamists have refused to join Al Qaeda's crusade, have remained on the sidelines, and have been partially critical of its suicide mission, particularly after 9/11, he said. In fact, the world appeared to mobilize to crush the jihadi forces, especially after the US decided to topple the Taliban regime in Afghanistan and pursue Osama bin Laden. "But the truth is, I'm dumbfounded by how swiftly radical Islamists have recovered from the devastating aftershocks of 9/11. It's unbelievable what has happened in the last few months in the world of Islam," Professor Gerges said. Islamists of all persuasions are positioned to capitalize on the coming war in Iraq and US foreign policy seems to be playing into the hands of militant Islamists, particularly in the Arab world and Pakistan. "I have never seen opposition to the US as intense, as hardened and as vocal as it is today. And it is not limited to mainstream or militant Islamism-it is across the board and encompasses nationalists, leftists and secularists." Professor Gerges argues that being anti-US has become the new staple of Arab and Muslim politics, particularly in the last year, with radical and secular forces joining in a new realignment to resist US foreign policies. Militant Islamists in the Middle East, Pakistan, Afghanistan and Southeast Asia are, he said, urging governments and society to turn their energy and attention to the coming battle with the US. "A new constellation of forces is emerging and it seem to me that US foreign policy, while scoring some gains against Al Qaeda, is somehow losing the broader political struggle in the world of Islam," he said. It would therefore be short-sighted to write the political obituaries of the Islamist movement, Professor Gerges believes, when the opposite is true: Islamists remain the most powerful active opposition in almost every Muslim country. One of the indirect results of the struggle between the militant Islamists and their governments is that popular culture has been "Islamized" from within, he said. "While the militant Islamists lost on the battlefield, they have won the political debate in almost every single Middle Eastern country, with their ethos and discourse permeating social, cultural and political life." He argues that Muslim governments in countries such as Pakistan, Algeria, and Kuwait neutralized the threat posed by militant Islamists but failed to address "the dismal socio-political and economic conditions that have poured fuel on the raging Islamist path of the last 25 to 40 years. Radical Islamism feeds on unemployment, poverty, political alienation and modernization." With existing political orders facing overwhelming socio-economic and political obstacles, it appears the Islamists are waiting for the opportunity to sweep into power. Former jihadi elements in many countries are re-assessing the relationship between the sacred and the political, the question of democracy, and the centrality of the rule of law and human rights, Professor Gerges said. "9/11 and its aftershocks have diverted our attention from the dramatic shifts that have taken place within the Islamist movement. To my mind, it's not a question of whether to take it as rhetoric but has to do with whether we should encourage their premises and try to build on them." 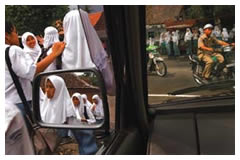 The choices facing not just the Middle Eastern regimes but also the should not be framed in terms of either supporting the regimes or taking a chance on the Islamist opposition, Professor Gerges believes. "Existing governments and the dominant opposition in the Arab world are two sides of the same coin-anti-liberal and anti-democratic. If you have sudden violent change, you'll have a Khomeini-like regime in most countries." The challenge will be how to balance concern for human rights and reform with the need to maintain regional stability. "On the one hand, you must maintain regional stability and have gradual, ordered transition but on the other hand you must realize that without having respect for the rule of law and human rights, you're going to have the same bloody situation perpetuated."

Ideally, political systems in Muslim countries should be opened up while checks and balances in the existing system are maintained so that the existing institutions and active civil society will guarantee that the new opposition forces don't "hijack the system". The has a great responsibility in this regard, Professor Gerges argued, because the reality and the perception is that military and political support maintains and supports existing political systems. "It is essential that the convinces its allies to remember that long-term stability and survival require the free assent of the people, improved political representation, and respect for the rule of law."

Were these reforms to be applied, they would greatly contribute to political and economic stability, sound the death knell of militancy and extremism, and, with more than 50% of the Muslim population under the age of 25, give hope to Muslim youth and motivate them to welcome modernity. "I think that when you have genuine change, respect for the rule of law and human rights, gradual opening up of the political system and integration of this particular constituency into the political sphere-I would argue it is then, and then only, that enlightened forces within the Muslim world will gain the upper hand and that fringe militant elements will be assigned ultimately to the dustbin of history."