A collaboration between City University's Department of Manufacturing Engineering and Engineering Management (MEEM) and General Motors to develop advanced coatings could result in the manufacture of more efficient, cost effective and environmentally friendly vehicles. 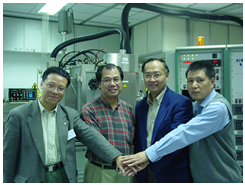 General Motors, the world's largest vehicle manufacturer, has given initial funding amounting to US$60,000 to MEEM's Advanced Coatings Applied Research Laboratory (ACARL). Under the aegis of Dr Lawrence Li, MEEM Associate Professor and Director of ACARL, the laboratory will work to develop nanocomposite coating, a superhard coating, for use in vehicle production.

Nanocomposite coating is a comparatively very hard material with a hardness exceeding 40 GPa, which is 40% of that of natural diamond (100 GPa), a material believed to be the hardest in the world. Nanocomposite coating offers greater hardness and adhesive properties which will increase the durability of tools in high speed machining.

"Superhard coating can be applied in different production processes such as drilling, milling, machining and stamping," said Dr Tai Chan, Programme Manager, Chemistry and Environmental Science Laboratory, General Motors R&D and Planning. "It will help speed up production, reduce production costs, and provide high quality products." Dr Chan visited ACARL on 26 March to review the progress of the project, which commenced in October 2001, and to identify the next phase of cooperation.

"CityU has a long history in coating research and is on a par with research institutions in countries like Germany and Japan in research on nanocomposite coating," said Dr Chan. ACARL, established in December 2001, received a grant of HK$7.3 million from the Hong Kong Special Administrative Region's Innovation and Technology Commission to develop superhard nanocomposite coatings for the manufacturing industry.

"In addition, CityU excels in applied research that matches the needs and direction of our company," said Dr Chan. The laboratory's advanced facilities, which were described as "world class" by the managers and directors of General Motors who visited CityU to review the project in June 2002, provided another incentive for General Motors to cooperate with CityU.

"Another reason for funding the project is that nanocomposite coating, which requires no use of toxic and expensive coolant in deposition, will achieve green machining," added Dr Chan. In addition to looking for efficiency and cost effectiveness in production, General Motors, which is dedicated to promoting environmental protection, also requires environmentally friendly production processes. 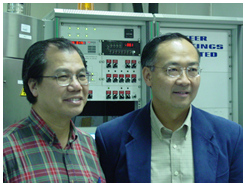 Discussion on future cooperation in the development of coating for stamping application is under way. As stamping demands tools with high resistance to wear and friction, the project on the drawing board will focus on developing coating with high lubricant properties, in addition to superhard and adhesive properties, said Dr Chan. The approval of further funding will depend on the result of the initial phase, which will be completed in October this year.

The project also involves Dr Shen Yaogen, Associate Professor of MEEM, and Professor Mai Yiu-wing of the Faculty of Engineering, University of Sydney, who is an Honorary Professor in the Departments of MEEM and Physics and Materials Science, and Consultant to ACARL. Professor Mai helped pioneer a research project on nanocomposite coating in MEEM when he headed the Department from July 2000 to September 2002.