IT excellence award for CASSOS

CASSOS, the Computer-Assisted Simulation System for Orthognathic Surgery, developed by CityU's Department of Computer Science (CS), was awarded a Product Silver Award at the IT Excellence awards 2002 for its advanced and innovative technology on 18 February. The CASSOS software system includes comprehensive records and image management functions designed to give maxillofacial surgeons the ability to manage and produce surgical plans prior to the actual surgery. Using the software, the bones of the face are manipulated to restore proper anatomy and function in patients with dentofacial bone anomalies. 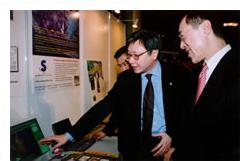 The brainchild of Professor Horace Ip , Chair Professor and Head of CS, CASSOS is an integrated and highly interactive system that operates on a cost-effective PC Windows platform. Its specially developed algorithm is at the heart of this first ever simulation system in Asia for orthognathic surgery that provides better accuracy compared with existing products. CASSOS is marketed by SoftEnable Technology Limited, an associated company of the CityU Enterprises Group. The software has been adopted by major hospitals and dental centres in Hong Kong , the mainland, Singapore , the UK and the US .

At the awards ceremony, Mr James Ng , Executive Director of CityU Extension, Professor Ip and CS Associate Professor Dr Ken Law , received a trophy and a certificate from Mr Henry Tang , Secretary of Commerce, Information and Technology, who officiated at the ceremony Organized by the Hong Kong Computer Society for the fifth year, the award scheme as recognized has one of the most prestigious events in the local IT industry.

CASSOS was acclaimed by the judging panel for employing "advanced technologies" and a database covering a number of ethnic types. The panel also praised the successful collaboration of the multi-disciplinary teamNincluding software engineers, animators and media expertsNin developing the innovative system.