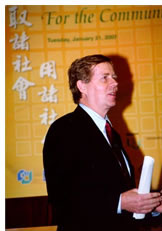 In a time of economic recession and imminent, substantial cuts in public funding, Professor Robert Prichard, former president of the University of Toronto and President and CE" of Torstar Corporation, gave local universities an uplifting message: institutional advancement, pursued professionally and persistently, can make a powerful difference in opening new sources of alternative funding. The culture of giving, once nurtured, will benefit all institutions big or small, established or aspiring-to-be-established. "Eventually, when the tide rises, all the boats will be raised," he said at the opening of the Conference on Institutional Advancement on 21 January at the University of Hong Kong. Jointly organized by eight local UGC-funded institutions and sponsored by the UGC, the conference was a culmination of a series of workshops on promoting good practices on fundraising and professional networking among the tertiary and non-profit making sector in Hong Kong . Fundraising and alumni relations were the focal themes of discussion at the conference, which was attended by around 300 local academics and administrators.

Professor Prichard's optimism resulted from his experiences in the Canadian tertiary sector. He drew similarities between the current situation in Hong Kong and that of Canada a decade ag government subsidies cut massively, no established culture of donating to one's alma mater, and institutional advancement in universities underdeveloped. Now that private funding is streaming in and government is reinvesting in higher education in Canada , Professor Prichard is confident that the same pattern will follow in Hong Kong .

A seasoned fundraiser, Professor Prichard offered his recipe for success in fundraising, which included: prescriptions on commitment; partnership with government; a clear policy of not letting donors dictate how the university should be run; and a strategic approach in communicating to donorsNhaving the right person to ask the right donor for the right amount of donation on the right project at the right time. "Be positive, passionate and persistent. People like to give to the winner, not the whiner." Fundraising is a business of trust and people engaged in this area should be highly dedicated, professional and act with integrity, he said.

Universities need not worry about private donations posing a threat to academic autonomy, Professor Prichard argued, citing examples of top-notch universities such as Yale, Oxford and Cambridge , which feed on a mix of public and private funding. "The greatest risk to academic freedom is having a sole source of funding. By broadening the source of support, you enlarge your capacity to remain independent."

Echoing Professor Prichard's sentiments, CityU's Professor Y S Wong , who was in charge of the University's institutional advancement function for almost five years before taking up his present role of Vice-President (Administration), offered his observations on philanthropy in Hong Kong . People in Hong Kong are renowned for their generosity in donating money to the needy, such as flood victims in China; however, philanthropy to universities, commonly perceived to be well-off institutions, is a relatively new concept in Hong Kong. He used the word "personalismONusing a personal networking to target the right personNto describe the current local charity landscape. Influential individuals, about 200 in number, controlling big family businesses and corporations, contribute about 90% of donations in Hong Kong, he observed. "It makes the job of the fundraiser both easier and harder. You have clear targets but a lot of competition for the same sources of funding."

Putting philanthropy at local universities in context, Professor Wong cited contributions from one of the most important donors, the Hong Kong Jockey Club, which alone has donated about $30.3 billion to the local tertiary sector in the past decade. The Jockey Club Charities Trust is one of the major donors supporting CityU's Student Hostels Project. To date, donations from the Trust and the HongKongBank Foundation towards the hostels" construction costs amount to $125 million and $15 million, respectively.

Raising money from the general public and corporations could be promising, but with low tax incentives and the absence of an established culture, the situation is rather like "sawing the stone trying to extract the jade", said Professor Wong. Personal networking is the key to success in the current fundraising scenario. Finding the right facilitator to ask the right donor at the right time is crucial. Speaking the same hometown dialect of the prospective donor is more important than writing persuasive proposals. "With more collaboration like today's forum, I think the situation is going to move towards a more systematic and professional approach, characterized by more information sharing among the various institutions."

For his part, Professor Cheng Kai-ming , Pro-Vice-Chancellor (Institutional Advancement) of the University of Hong Kong , told the audience how he overcame his fear of "shaking hands, putting on a smile and asking for money". "A great university has to acquire ample resources," he said, "because its eminent alumni and the community endorse and share its contributions and its mission.