More than 100 academics and professionals from 14 countries and regions around the world participated in the 2nd International Conference on Application and Development of Computer Games held at from 6 to 7 January, which presented a broad perspective of technical and application challenges to the computer game industry in the information age. More than 45 papers were presented at the conference, which was organized by CityU's Division of Computer Studies. 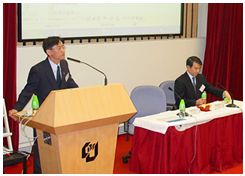 With the emergence of networking technology and the popularity of broadband Internet, the computer game industry is growing rapidly, with more utilization of 3D computer graphics, artificial intelligence and online programming. "In Hong Kong, however, there are only a few well-established game companies which hire 20 to 100 employees mainly for producing 3D animation, and only a small number of game companies are equipped with development teams providing online services," said Organizing Chairman Dr Charlie Choi, Acting Head of the Division of Computer Studies, in his welcoming address. "Unlike their and counterparts, game developers have little or no background in the digital entertainment industry." 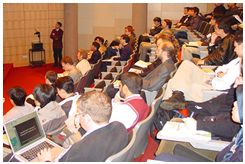 The theme of the conference, Network/Multiplayer Games and Security, signified the rapid progress of application and development in the field for the next few years. "We aim to provide a forum for researchers and practitioners from the academic, industrial, and public sectors, to share their latest innovations on game development and applications," said Dr Choi.

Keynote speaker Professor Takenobu Takizawa, from Japan's Waseda University, predicted that Shogi (Japanese chess) will develop rapidly in the near future, and will reach the level of human championship in 2024.

Topics covered at the conference included infrastructure for games on the wireless Internet, the design of a Kung Fu motion library for 3D game development, game and network security, computer games in education and training, and multimedia and programming techniques.