Symposium on Islam in China and Southeast Asia 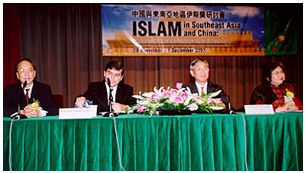 The first large-scale conference on Islam held in and the first worldwide comparative discussion of Islam in and was held at CityU from 28 November to 1 December.

"Islam in Southeast Asia and China: Regional Faithlines and Faultlines in the Global Ummah" was jointly organized by CityU's Faculty of Humanities and Social Sciences, Southeast Asia Research Centre, Centre for Cross-Cultural Studies and Chinese Civilisation Centre. Professor Matthew Chen, Dean of the Faculty of Humanities and Social Sciences, welcomed some of the world's leading experts on Islam from Australia, mainland China, Malaysia, the Philippines, Singapore, the UK, the US and Hong Kong to the symposium. After , "We can no longer not understand and educate ourselves about Islam, a cultural, religious and political force that demands the rest of the world comes to terms with it," Professor Chen said. 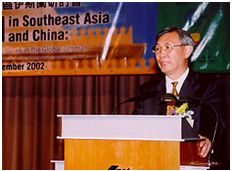 In delivering the opening address, CityU's President, Professor H K Chang, shared with the audience his reasons for his interest in Islam. There are three main reasons, Professor Chang said: his personal contacts with Muslims, which began when he was a child in Shandong province; the speed at which Islam spread during the seventh and eighth centuries and the contributions made by Islamic societies; and the manner in which various non-European societies have responded to the dominance of European culture in the past few centuries. How Islam evolves, Professor Chang concluded, "¡Kwill impact on the development of the entire human race." 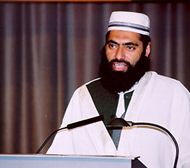 Mufti Arshad of the Kowloon Mosque and Mr Saeed Uddin, Chairperson of the Incorporated Trustees of the Islamic Community Fund of Hong Kong, also spoke at the opening ceremony. Mufti Arshad gave a short blessing and Mr Uddin greeted the delegates on behalf of 's Muslim community. 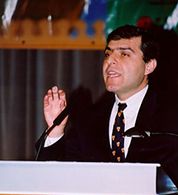 Professor Fawaz Gerges, Christian A Johnson Chair, International Affairs and Middle Eastern Studies, Sarah Lawrence College (New York), delivered the keynote speech on the changing character of Islam. Focusing on the jihadi, or revolutionary movements in the heart of Islam, Professor Gerges explored the changes in jihadi Islamism over the past 25 years and, in particular, why militant movements have shifted their focus from targeting internal existing regimes to fighting the . Soundly defeated in the battlefield in almost every Middle Eastern country and reeling from the after effects of 9/11, the militants, far from being crushed, have rallied with nationalists, leftists and seculars to oppose current foreign policy, particularly the coming war with . The only way to end the perpetuation of the "same bloody situation", Professor Gerges believes, is for the US and its allies to encourage the Arab world to gradually open up its political systems and integrate rising social forces, especially Muslim youth, into the political sphere, while maintaining checks and balances. "I think that when you have genuine political change, respect for the rule of law and human rights, gradual opening up of the political system and integrating this particular constituency into the political sphere -- it is then and then only that enlightened forces within the Muslim world will gain the upper hand and --fringe militant elements will be consigned ultimately to the dustbin of history."