A new chapter in their lives 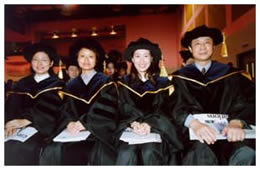 The 17th Congregation marked a new chapter in the lives of this year's 6,864 graduates. Upon their shoulders rests the future, and CityU's President Professor H K Chang reminded them in his address, "You cannot plot out your life story and anything is possible," he said. "With hard work and determination you can succeed in anything you do and go anywhere you choose. The future is yours."

What will happen to our graduates in 10 years' time? Professor Chang chose the theme of six CityU alumni who gather at a reunion banquet in the year 2012. One by one, as the story unfolds, they recount what they have done since they left CityU: a China Business major settles in her job in Beijing and sees good prospects as the mainland becomes fully integrated into the World Trade Organization; a Mechatronic Engineering major, happy in his work at Chengdu, has married a woman from Sichuan Province; an associate degree holder in Computer Studies, accustomed to speaking Putonghua at home, finds it a big asset to his job with a Shanghai company listed in Hong Kong; a Creative Media major, after several years working in Hong Kong, has moved to Australia with her husband to set up their multimedia production company; a School of Law graduate is now a lawyer in the Guangzhou office of a Canadian insurance company; her husband, who is also one of the six alumni, is happy working as a secondary school teacher in Hong Kong. Three of our characters have pursued their careers in the mainland, two of them became a couple and one has migrated overseas; all of them have worked hard and obviously rejoice in the unexpected twists and turns in their lives "You are part of a vast, exciting country that is expected to advance rapidly in the next ten years. You can make your home anywhere in ." President Chang concluded, "Wherever you go and wherever you do, I hope you will take some time out of your busy life to think about ." 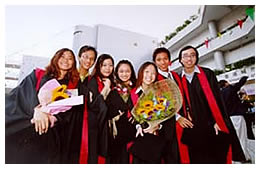 Speaking on behalf of the graduates, Ms Jacqueline Tong, a graduate in Public and Social Administration who has embarked on a career as a journalist, thanked CityU for giving her the opportunities to realize her full potential, through an exchange programme, many lectures and student activities. She concluded with a pledge, "May we act as good and loyal ambassadors of , and work together for the prosperity of ". 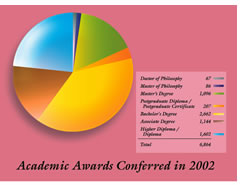