Realizing our real worth and finding our own way

In an expanded Management Board meeting on 23 September that included heads of academic and administrative departments, the President discussed at length with some 50 senior colleagues the developments and challenges facing today and over the next few years. 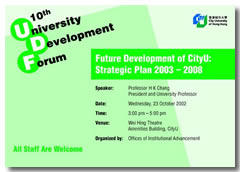 Starting with an analysis of our existing strengths and weaknesses, Professor H K Chang said that the University is blessed with a team of quality, committed staff, led by many renowned academics, who have helped the institution attain "spectacular achievements" in the relatively short span of 18 years. That the University is centrally located in and that is strategically located on the crossroads between and the outside world are also very favourable factors.

Yet the University, the President told his colleagues frankly, is suffering from an image problem: our real worth and contributions to have generally exceeded our reputation in the community. There is also a mismatch between our student admission profile and our existing academic strengths. Some faculties with excellent academic staff and resources have been less successful than others in attracting "quality" studentsNby which Professor Chang was referring strictly to students with higher scores in public examinations. He believes the quality of our student intake is an area that needs to be addressed.

Looking over a five-year horizon, the President sees funding as one of the top challenges the University has to face. Instead of having a five- to six-year period to phase out government-funded associate degree programmes in the , the President said he learned recently that the government intends to shorten the transition to three years. This means it is likely some of these programmes will have to be self-funding from 2005-06, which will have important bearings on the financial situation of the University. On a related point, CityU, along with the rest of the local higher education sector, is under general pressure to expand its non-government sources of revenue by offering self-financed programmes (not limited to the area of continuing education but, increasingly, encompassing taught postgraduate programmes) and commercializing research.

The way ahead for

The President then proceeded to outline his personal views on where City University should be heading in the greater context of Hong Kong's future role vis-?-vis China's rapid development.

Professor Chang said the issue can be resolved in three steps: first, to define Hong Kong's new position in the overall context of China's rapid emergence as a global economic powerhouse; second, to determine how best CityU can contribute to Hong Kong's new role; and last, to come up with a new strategic plan that can help the University achieve its vision and mission.

's real value to lies in its role as a bridge, both in the physical and symbolic sense of the word, said Professor Chang. Starting from its early days as a British colony and right through the Korean and Cold Wars in the 1950s and 1960s, was the channel through which traded and interacted with the West. The bridge, metaphorically speaking, became wider and more complex when decided to modernize its economy and open up to the world in the late 1970s. What started as a trickle of northward-bound capital, advanced management ideas and technologies from , and from other places through , is now an unstoppable deluge that has catapulted to its current position as the world's top beneficiary of foreign investment and, gradually, its largest manufacturing base.

Since 1997, as 's economic prowess increases by leaps and bounds, interactions between and the mainland have become more regular and have intensified. Exchanges are now bi-directional and multi-layered and the volume of exchange far exceeds that over the previous 20 to 40 years. "The bridge, so to speak, has three decks," Professor Chang said.

The lower deck carries local traffic in the Pearl River Delta region. In the past two decades, our manufacturing industries have been "hollowed out" and relocated to Shenzhen, Dongguan, Zhuhai and Zhongshan. Yet with its excellent infrastructure in transportation and telecommunications, and its well-established practices in accountancy, law, and the like, Hong Kong is likely to retain a leading position in the region, even though some developments there have started to chisel away at our competitiveness (the cheap and abundant supply of labour and land, for example). Professor Chang believes that operates, and will continue to operate, as a logistic, financial and tourism centre, a design and R&D centre, and a headquarters town for an expansive belt of manufacturing industries in the Pearl River Delta region and neighbouring areas.

The bridge's upper decks, on the other hand, offer a nationwide and global perspective, beyond our immediate hinterland, with higher hopes of a truly two-way traffic of greater volume. This is where Hong Kong's service industries and trained personnelNaccountants, insurers, lawyers, engineering designers, R&D professionalsNwill make a big impact for a long time to come. " is still a strong bridge for , through which it can reach out to the world," said Professor Chang. "Increasingly, will also be a bridge through which exports its services as well as goods."

In the same vein, CityU will have to find its place in the context of the bridge scenario. "I believe our real contribution lies in how we can produce better graduates to help fulfil its destined role as a bridge between the nearby Pearl River Delta and the entire Chinese mainland at one end, and the rest of the world at the other end."

If and CityU are destined to serve as bridges, Professor Chang continued, then our future graduates will have to be equipped to compete not only on the level of technical expertise, but also with a broader vision to recongnize the function and prospects of the bridging role. Thus they will need good language skills (Chinese and English) and cross-cultural understanding (based on a considerable knowledge of Chinese culture and a familiaity with other cultures). Seen from this angle, CityU's early forays into English language and Chinese civilization courses are important steps in the right direction. "We'll introduce further reforms to our curriculum and offer more meaningful and substandial out-of-discipline courses to help broaden our students" learning experience," Professor Chang said. He believes that the new strategic plan will be another milestone in this direction. CityU, he added, should become a centre of excellence in professional education and applied research, contributing to 's future role in and the world.

Before opening the meeting to questions from the floor, Professor Chang turned to another task at hand: restructuring the senior management to help the University better meet its immediate and future challenges.

Among its many suggestions, the recent Sutherland Report on Higher Education in recommends that each university's governing body carry out a review of the "fitness" of its governance and management structure.

In response to this call, and to better prepare the University to harness the changing environment envisioned in the soon-to-be-announced Strategic Plan 2003D08 (a consultation draft is now available on the Intranet), the President has initiated a review of the senior management. In May, he advised his Management Board colleagues that he would soon seek the Council's approval and support in pushing such a reform.

The President reiterated what he had said at an earlier meeting in September: the review will focus on two pertinent governing issues: enhancing the relationship between the Council and the University management, and restructuring the senior management team.

On the former issue, the President said that the Council will establish a high-level panel, inviting key Council members to review the governance structure. The whole process in this area is expected to take 12 to 18 months.

On the latter, it is likely that a new line-up of senior management responsibilities will be announced before the end of the year. The President told his colleagues that, acceding to repeated requests from the Council, he had agreed to establish the position of Deputy President, as provided for under the University Ordinance. Internal discussions have begun on the role and duties of the Deputy President and an international recruitment exercise, spearheaded by a search committee, will begin soon.

The role of President in the new line-up, Professor Chang said, is to provide vision, and win the support of staff, students and the community at large. He will also motivate the University community to "move" towards achieving its stated goals. He will, however, relinquish much of the day-to-day management to his team of senior managers. As for the role of Deputy President, Professor Chang invited staff to air their opinions on whether the Deputy should serve as the Senior Vice-President/Provost, as occurs in many universities in the , or as the University's "Chief Operating Officer", as is the case in some local universities.

Lastly, the President expressed his views on the qualities of a leader at the institutional, faculty and departmental level: unity of word and action, tolerance of differences of opinion, sharing information and improving communication with staff, and cherishing a sense of belonging with co-workers and putting the well-being of the University before personal interest.

To improve internal communication and gauge staff comment on these pertinent issues, the President said a University development forum will be organized on 23 October, mainly through the offices of the Institutional Advancement group.