Campus gets an 'A' for ambiance 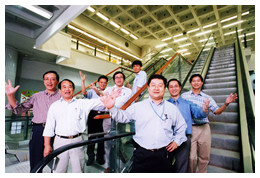 The second phase of CityU's ambitious physical improvement program is almost completed and visitors will notice a distinct difference in the campus ambiance, particularly in the fourth floor of the and tidying up the pedestrian entrance-or "Red Door".

This year, the most notable campus improvements include the tunnel connecting CityU with Festival Walk, the covered walkway in front of the "Red Door", and widening the fourth-floor mall area in the . In addition, some 30 classrooms in the Green Zone have been renovated.

"It's nice to see the happy faces of the students. I was at the opening ceremonies for one of the classrooms we renovated, and people were there taking pictures and talking positively about our work."

Last year, the washrooms, doors, and changing rooms in the campus sports complex were improved. Since then, further renovations included renovating the student canteen, providing more tables and sitting areas on the fourth floor of the Academic Building by relocating the escalators, staircases, University bookshop and Hang Seng Bank

To minimize disturbances caused by the work improvements-except on the classrooms and canteen-were carried out between 11 pm and 6 am.