Chau Yee-pan and Chung Wai-sze won first and third runners-up awards respectively in the contest. Participants presented a five-minute speech on the thirtieth anniversary of the Sino-Japanese normalization of relations followed by a question-and-answer section.

"I feel very grateful for my lecturers, in particular, Dr Rita Takahashi, for their support and guidance. They have helped a lot on improving my pronunciation and presentation skills," said Chau Yee Pan. 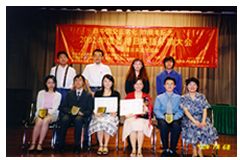