Extending the frontiers of science 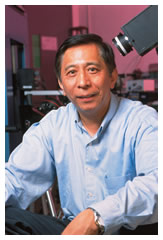 Building safety is a serious concern in Hong Kong, where there are around 50,000 high-rise buildings, with more on the drawing board. "Our spectacular high-rises are a unique feature of Hong Kong," said Professor Michael Hung, "but our other unique features - steep slopes and reclaimed land - mean that our tall buildings are prone to foundation movement caused by landslides or land settling. Foundation instability is most dangerous as it may result in building collapse." In addition, our yearly typhoons cause cyclic action, bending the buildings back and forth and possibly loosening the foundations, or causing other fatigue damage. And deterioration due to aging is a further concern; Hong Kong's buildings are designed for 50 years' use, which means some are close to the end of their lifecycle.

Only regular inspections can ensure buildings are safe, but the fact is that the current building inspection technology is not adequate, based as it is on subjective human inspection. "Inspectors use hammers to check for separation, or dig out a plug of material for laboratory testing. It's primitive and unreliable. We do need better inspection technology," Professor Hung explained.

Prevention through NDI the key to building safety 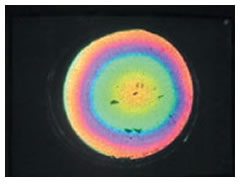 The key to building safety, according to Professor Hung, is prevention through non-destructive inspection (NDI) technique and continuous health monitoring. He received the grant for his research proposal: "Non-destructive Inspection of Buildings and Structures Using Shearography" in which he collaborates with scientists from the University of Hong Kong, the Hong Kong University of Science and Technology and the Hong Kong Polytechnic University.

Shearography is an optical sensing technique that uses laser light to reveal flaws by seeking flaw induced deformation anomalies or weakness in response to stress. Although it is still a relatively new technique, it has already had wide industrial acceptance. For instance, the National Aeronautical and Space Administration, the Federal Aviation Administration and the automotive industry use it to evaluate structures and inspect tyre quality.

Specifically, Professor Hung intends to develop shearography as a full-field measurement tool of static and dynamic deformation; as a tool to evaluate structural deterioration, such as steel corrosion and concrete degradation; and as a device to remotely inspect building exteriors and, more importantly, the health of building foundations. 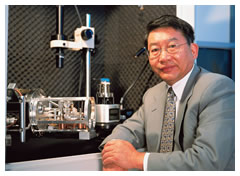 But it is on the safety of buildings in Hong Kong that Professor Hung is currently focusing. In addition to developing the shearography technique, he is also working on another project to monitor building safety: smart structures -- new buildings in which are embedded durable stress sensors, another of his inventions. "If we can embed the sensors into the building, they will act like the human nervous system and will allow continuous and long-term monitoring of signals from the sensors," he said. Each building would have a local data collection box and the information would be transmitted through the Internet to a central monitoring system.

To achieve this, however, requires a long lasting transducer, unlike the ones in use today, which would not survive in a hostile environment. Professor Hung believes his sensor may solve the problem: it is based on a piece of crystal, and crystal can last for hundreds of years without any degradation. When stress is applied to the crystal sensor, it changes colour. "The more stress we apply, the more colours we see. So what we're doing now is trying to interpret the colours so that we can relate them to stress automatically," he explained.

With his current funding, Professor Hung aims to carry out laboratory investigations over the next three years, then carry out field feasibility studies, which he hopes will attract support from industry. "We are focusing at the moment on building inspections because of the safety concern in Hong Kong, but the technique can be extended to bridges, tunnels and dams - it could be a worldwide market for Hong Kong industry to develop higher value-added services."

Expanding the frontiers of nanowire research 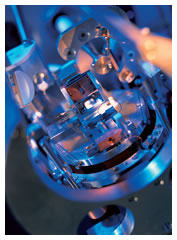 The exciting field of nanowire research is at the cutting edge of science today. The CityU team led by Chair Professor S T Lee received their grant for the project titled "Science and Technology of Silicon Nanowire" - their third such allocation in the last five years.

Silicon, Professor Lee explained, next to carbon and oxygen, is one of the most common elements in the universe, and today's semiconductors are 90% made of silicon. Devices are made by forming a big silicon wafer, then slicing on it smaller and smaller bits to make it into computer chips. But there is a limit to how thin the bits can be; today, it's about 100 nanometres (a nanometre is one thousand-millionth of a metre). Cost is also a factor, Professor Lee pointed out. "To build a manufacturing line that could make 0.1 micron-size (1 micrometre = 1,000 nanometre) bits would cost US$10-50 billion. So you have a size limit and a cost limit. And the manufacturing line also has to be housed in a super-clean environment - a one micron dust particle could cover and spoil 50 bits." So Professor Lee and his team have taken the opposite tack: instead of using a large wafer and cutting it smaller, they are taking the bottom-up approach, building up from one silicon atom at a time. This is nanotechnology.

"What we have done at CityU is to develop a new method of making silicon nanowires. We can make them as thin as one nanometre wide, and in very large quantities," Professor Lee said. The method they have developed is known as the oxide-assisted growth method, and it has been patented in the US. Using this method they can prepare large quantities of silicon nanowires free of metal impurities, unlike the traditional method, which has metal contamination. And they can also use the new growth method to extend to other semiconducting nanowires, it not being restricted to silicon nanowires. "And we have a certain amount of control, which we're still learning about, over the wires, in terms of how thick we want them to be, how long we want them to be, and how conductive we want them to be," Professor Lee said. Another advantage is that the wires can be grown as chains of particles or as ribbons. Basically, the revolutionary growth method provides Professor Lee with a method of controlling that will allow him to "develop the know-how to understand and eventually produce nanowires with desired properties".

After growing the wires with the properties desired, the next task for the team is to characterize the individual wires, in terms of their electrical, optical and chemical properties. "You can characterize your hair, but this wire we're making is 10,000 or 100,000 times smaller than your hair," Professor Lee said. Then, the next step is to decide how to use the properties, perhaps for chemical sensing, for lighting, for biological applications. Finally, in addition to the experimental work, they have to develop a theoretical understanding. "The ultimate goal is to guide and to predict the property and the growth of nanowires. That's it in a nutshell."

Silicon was chosen primarily because of its popularity, Professor Lee said. If they can determine the properties of the nanowire, it will be easily implemented into traditional devices, based on existing knowledge. "For the past 50 years, we've developed silicon into sophisticated materials for our electronic applications. That's why, if we can learn to build silicon nanowires from the bottom up, it will be relatively easy to apply them to today's electronic devices."
Silicon has another advantage: it is also a model system for semiconducting nanowires. So the knowledge, technology, and science gained from studying silicon nanowires will be applicable to other semiconductor nanowires. "It's a noble goal - we have a big task ahead of us," he said. But the team has an advantage in that they have made two exciting breakthroughs, which puts them at the cutting edge of the world in certain areas.

First, in the growth area, the team has developed a revolutionary method to provide high purity, high quality nanowires with control property and in large quantities. And this method is applicable to other materials. "This is our strength and our track record is world recognized," Professor Lee said. The other world first is the development of a unique technique to characterize single nanowires by scanning tunnelling microscopy (STM). The reason why STM is so important, Professor Lee explained, is because it can give an image of individual atoms on the surface. From the imaging, they can investigate and learn the atomic structure of these tiny wires and how they behave differently from the bulk. This is known as the small size effect, or quantum confining effect.

In addition to measuring the atomic structure of single wires, single wire characterization by STM also allows the team to measure the electronic properties of single nanowires, which will tell them the band gap. "Finding the density of states - which is not just how the wire looks but also how the electrons are bonded inside the wires - will be difficult, but I'm confident we can do it," he said. And as a result of investigating the density of states of nanowires, the team hit on another exciting discovery: as a silicon nanowire shrinks in diameter it emits a very strong light.

Traditionally, silicon is used only in electronic devices and not in optical devices because it cannot emit light. "But when its size is shrunk down, it emits light, which gives us hope that it will be possible to integrate optical devices with silicon electronic devices," Professor Lee said.
Eventually, Professor Lee aims to expand silicon know-how to other semiconducting nanostructures: gallium arsenide, gallium phosphide, etc. The team doesn't just make wires, they can make hollow tubes, and the world's first silicon ribbon, which is wide, very thin and long, with curves, ridges, or holes in the middle. "We don't know what good nanowires are at the moment. We'll explore their novel properties, then exploit them for various applications. It gives us scientists a job to do!"