CityU Gallery is presenting, for the first time in , the work of artists Yu Ping and Ren Ping, featuring their 60-plus-collection of paper-cut prints and stencil printing. 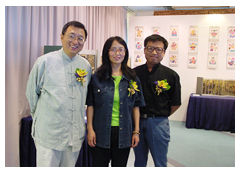 The exhibition features a wide variety of motifs and themes based on popular Chinese folklore, festive practices, landscapes, animals, and still life. The series also contains a 38-metre paper-cut roll featuring the popular folklore tale "Father Mouse Marries Off His Daughter". The artists spent more than 10 years on its completion. 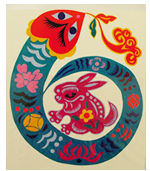 The exhibition, organized by the Chinese Civilisation Centre and CityU Gallery, runs from 21 June to 14 July. "Mr and Mrs Yu's works display the essence of Chinese folk art. At the same time, their skills and creativity transform the art into a distinctive form, enriching the development of Chinese art," said Professor Cheng Pei-kai, Director of the Chinese Civilisation Centre, at the opening ceremony on 21 June. Following the ceremony, Mr and Mrs Yu demonstrated their paper-cut artistry by producing a flower bundle and a frog-shaped cutting. 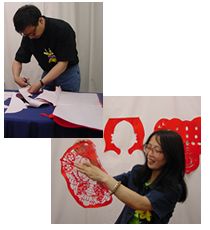 A first prize winner of 's Paper-cutting Grand Award Competition, Mr and Mrs Yu's art is inspired by their birthplace in province, where folk art is popular and stencil printing method is commonly used for textile dyeing. About eight years ago, the couple discovered that there are many similarities between colour paper cutting and folk textile printing. They modified their stencil printing skills to absorb the essence of folk art and transformed it into a distinctive art form.

Mr and Mrs Yu's work has been widely exhibited and recognized on the mainland and in . Some form part of the 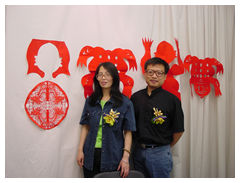 collections of mainland museums, including the Chinese National Museum of Fine Arts, Beijing Museum, and the Beijing Arts and .