The house shook. The picture hanging on the wall and the plant pots on the table almost tumbled to the floor. But the people inside the house were far from panicking. They were, in fact, excited to experience the vibrations. 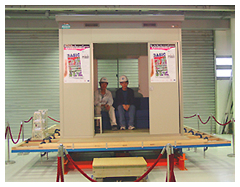 The Department of Building and Construction (BC) invited staff and students to experience a "mock earthquake" in its Heavy Structures Testing Laboratory on 11 May. A "shaking table" with a platform area of 20 square metres, the largest among tertiary institutions, has been installed to study the effect of earthquakes on structures, and to test the resistance of structures to artificially generated earthquake loadings. Driven by a hydraulic actuator, the shaking-table generates simulated earthquake motions.

The participants in the mock earthquake experience, in batches of three, were located in a "mock house" mounted on the shaking table. A series of "earthquakes" at accelerating intensity were then set in motion for about 10 seconds. The participants, comfortably seated at the beginning, had to clutch onto the sofa to stop themselves from falling off at the end. "It's fun, though I feel a bit dizzy," one participant said.

"The shaking back and forth, with an intensity approximating point three on the Richter scale, simply gives you a one-dimensional experience of a real earthquake," said Mr Joseph Wong, the Laboratory Manager. "Although real earthquakes don't last that long, they are of course more destructive."

Although Hong Kong is located on an earthquake fault line, there have been no catastrophic earthquakes in the past century. Mr Wong's aim is not to alarm people but to raise public awareness of the importance of designing buildings and structures to resist the effects of an earthquake.

A series of minor earthquakes in Hong Kong between 1994 and 1995 focused attention on the importance of including earthquake-resistant features in the design of major structures. Such features have been included in the design of major infrastructures such as the Tsing Ma Bridge. Although buildings in Hong Kong are required by law to be typhoon-resistant, the same does not apply to earthquakes. "Though the possibility of a major earthquake is small, Hong Kong needs to be prepared," said Mr Wong. "If there are laws in Shenzhen requiring buildings to be designed to reduce damage by possible earthquakes, why not Hong Kong, which lies just a border away?"

Representatives of the media have also been invited to experience the mock earthquakes.