CityU students have displayed that rarest of talents, the ability to excel in intellectual and physical challenges, by winning championships in this year's Inter-collegiate Debate Competitions and the Hong Kong Post-Secondary Colleges Athletic Association Competitions.

CityU's debating team won the championship in this year's Inter-collegiate Debate Competitions with an unprecedented shutout victory of 5-0 against Chinese University of Hong Kong in the final contest on 7 April. The CityU team, comprising students Rosa cho, Li Kin-on, Hugh Cheung and Maggie Lau, impressed the adjudicating panel with their eloquent performance. Mrs Fanny Law, Secretary for Education and Manpower and one of the panel judges, commended CityU's team for their "loquence, language proficiency, and poise". 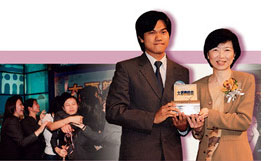 Mr Li Kin-on, a third-year CityU Social Science student, was named best speaker in the event. Miss Yip Wing-sze, captain of the CityU debating team, attributed their success to the hard work of the team and the mentorship of Mr Chan Kwok-keung, an alumni and former debating team member.

"Our success in winning this year's championship is attributable to the team's thorough research on the topics, which enabled them to deliver an outstanding performance on stage," said Mr Chan.

CityU's debating team now moves on to represent Hong Kong in a regional contest against teams from Guangzhou and Macau, at the invitation of Radio Television Hong Kong. 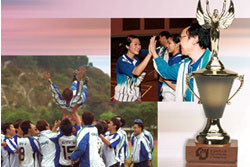 The Physical Education section of Student Development Services held an annual prize presentation ceremony and celebration dinner on 17 April to commemorate on their success. "A coach helps to develop your potential to the fullest," Vice-President (Education) and Dean of Students, Professor Edmond Ko said to team members while inaugurating the function. "When you become your own coach and take charge of your own life, you become an adult."

Department of Public and Social Administration