The smart approach to building safety

One of the leading experts in steel structures believes that in the wake of the World Trade Centre (WTC) attacks in September 2001, teaching building and engineering students how to analyse the behaviour of structures is very important.

"More and more we are teaching students to understand the structure," said Professor S Kitipornchai, Chair Professor in CityU's Department of Building and Construction. "These days there are many analysis tools available for use in the design process, whereas before we had to do a lot of complex calculations manually. Now the process is faster and we have more time to teach students how structures behave and respond to a variety of loadings--for example, in cases of fire, earthquake or high wind." Design engineers must always strike a balance between safety and cost. The WTC attacks highlighted the importance of structural redundancy--meaning not only that buildings must have adequate safety factors against collapse, but also that they must have a number of alternative load paths should they be partially damaged or destroyed. More attention is being focused on issues such as fire safety, means of escape, and on ensuring progressive delayed collapse. 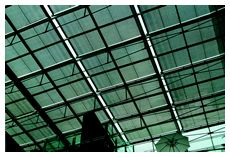 One of the methods for building control that is currently the subject of research is the deployment of smart materials that result in smart structures. Ideally, the materials in these structures should provide reinforcement and strength when they are subject to unexpected loads, whereas conventional structures anticipate the "worst case scenario" by simply adding material, and thereby increasing cost. In the future, smart structures should be able to respond to potential problems with reactions similar to the nervous systems of living organisms.

"Smart materials are capable of reacting to the environment, for instance, altering their structural characteristics to compensate for aging or even repair themselves when damaged," explained Professor Kitipornchai. "If this is not possible, they should then be able to warn us if a building is damaged in its early stages and needs attention."

Actuators are smart devices that allow structures to adapt to their environments by modifying the shape, the stiffness, the position, the natural frequencies and other mechanical characteristics in response to changes in temperature, electromagnetic fields or other stimuli. These devices replicate the functions of muscles and nerves in the human body.

Electrorheological (ER) and magnetorheological (MR) fluids are two of the most common actuator materials. When acted upon by electric or magnetic fields, these fluids transform into solids within milliseconds. This process has been used for a number of years in control applications such as brakes, clutches and hydraulic valves.

Engineers use ER and MR fluids to stabilize tall buildings during unexpected weather patterns, such as strong winds, or in the event of seismic activity. The fluids are placed in dampers or stabilizers that are incorporated into building structures. Movements caused by tremors or swaying trigger magnetic forces in the dampers, which initiate the rapid reversible transitions in the actuator fluids. This process stabilizes the structure because the dampers, capable of exerting up to 20 tons of force, absorb energy from the extra loading and reduce the amount of oscillation and vibration.

Although these applications increase building safety, explained Professor Kitipornchai, they cannot eliminate all possible failures within tall buildings. "Not many structures fit into the concept of smart structures. What I am talking about is years ahead--to be able to build structures that react to natural loading. The most successful applications have been in response to earthquakes and the reduction of vibration in strong winds, but we are far from designing buildings that can be prevented from collapsing and buckling through the integration of smart materials."

Developing better ways of fighting fire
In addition to smart materials and structures, Professor Kitipornchai believes that construction experts can improve building safety by developing better ways to combat fire. "We need to develop materials that are more fire-resistant. We use steel in tall buildings because it is lighter than concrete and more ductile. That is, its flexibility allows it to absorb more stress without breaking. But steel is soft and loses strength even at 500 degrees plus. Although concrete is more brittle, it does not weaken to the same extent as steel at high temperatures."

Moreover, Professor Kitipornchai sees little justification in building very tall structures. "Tall buildings such as the WTC were popular in the 70s, but these days they are more popular in Asia than in the US or Europe." He suggested that status rather than practicality is often an overriding consideration. "With communication tools such as email and the Internet, people don't need to work in large groups in one building. Of course, Hong Kong is different because there is such a limited amount of land so we have a high density of tall buildings, but in other countries, such as the US, the need for very tall buildings has been significantly reduced."